Fat: They don't call them FAT cats for nothing 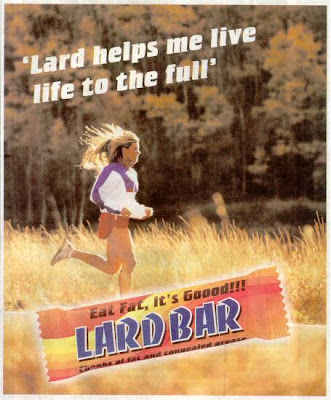 Bad times for my (so far) nonexistent budget.
Yesterday, I drove up to Marin Sun Farms, which sells local grass-fed meat in Point Reyes Station, a town "just up the coast" that is actually a far piece up the coast. Based on the web site, I thought MSF would solve all my Fat requisitioning needs, but it was a big, expensive, farflung disappointment. What kind of a butchering operation doesn't sell suet? The only thing I came away with was lard. They offered two options: a tiny, tidy $4 container of rendered lard and then this gnarled shrink-wrapped $25.69 hunk of unrendered leaf lard the size of a Thanksgiving turkey. Of course I had to have that one. Princess.
Since lard isn't dinner,  I then went to the supermarket (more milk, beef soup bones, salmon, rhubarb, etc.)  and spent $45.07.
We ate:
-Roasted Atlantic salmon with Jennifer McLagan's red butter sauce, which was in fact maroon, the color of aged $1.99 Charles Shaw cabernet muted by hunk after hunk of butter. This won't become a staple, but it was delicious. Price of dish: 15.09*
-roasted cauliflower from Orangette, using the new bright yellow variety that has, per Mark Bittman, 25 times as much vitamin A as the white kind. Also, more flavor. I'll never buy white cauliflower again, nor will I ever eat it steamed or boiled. This was incredible and easy: $3.
-miner's lettuce salad. Wild miner's lettuce is in season on our hill, and it makes a salad much loved by my uncouth children. Though it had a little dressing, I'm calling this free. 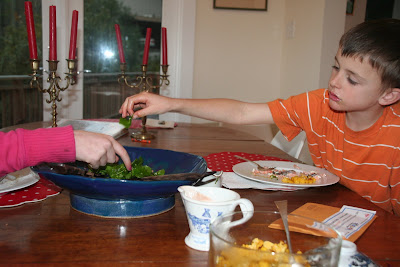 Total price of dinner: $18.09
*Does this seem low for salmon to generously feed four? When I looked at the receipt just now I noticed that Whole Foods actually charged me for tilapia, which saved roughly $7. No, this doesn't bother me at all.
Posted by tipsybaker at 3/18/2009 08:52:00 AM

Labels: Fat
Email ThisBlogThis!Share to TwitterShare to FacebookShare to Pinterest