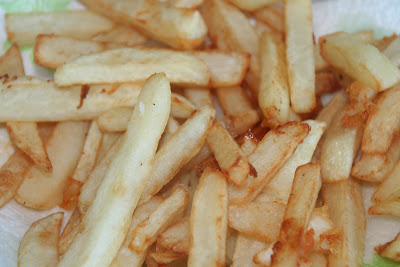 Eating hot french fries showered in salt at your own kitchen table is an ecstatic experience, especially if you allow yourself fries as seldom as I do. A dish of mayonnaise would have made it even better, but I like to be able to see my feet when I look down.
I fried half the potatoes in lard, which is what Jennifer McLagan recommends in Fat, the other half in peanut oil, then asked the kids to do a blind taste test. 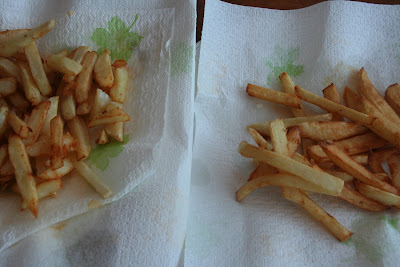 Owen declared himself a fan of the fries on the left (lard) while Isabel and Juliet preferred the fries on the right (peanut oil.) I wanted to back the lard, but have to side with the girls. Though it wasn't in any way offensive, lard (this lard, anyway) contributes a faint flavor to a fry that I am at a loss to describe. It's just there. I'm sure oil has a flavor too, but we've come to believe, perhaps wrongly, that oil is just the flavor of french fries.
Hardly matters. All fries disappeared in fifteen minutes, lard and peanut oil versions both. No one bothered with subtle distinctions.
I also served mango "milkshake" which was actually mango lassi made from Anne Mendelson's Milk. Like all mango lassis I've made (which is to say, one, thirteen years ago) this one involved blending yogurt, fresh mango, ice, and a little sugar. Delicious. I probably oversold the drink by promising "milkshakes" but 2/3 of the children present ended up drinking all their lassi. This was the vegetable course.
The shortbread: good, but too soft. I've put it back in the oven this morning to see if it can toast up a little bit. Maybe a wedge before spin class?
Speaking of traditionally-built women, this is very exciting.
Posted by tipsybaker at 3/27/2009 07:31:00 PM