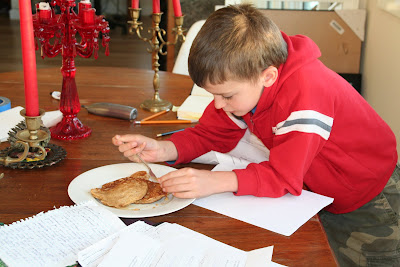 That's Owen, yesterday, trying to finish his homework and eat the 4-grain pancakes I made out of the Joy of Cooking. According to the notes in the margin, I first made these in August '06 and the kids "loved" them, probably because they are full of honey and cinnamon and taste like oatmeal cookies.  Mark rolled his eyes when he watched me mixing the cornmeal, oats, and wheat flour, but once again Owen "loved" them. Isabel, for whatever reason, did not partake.
So, this morning I pulled out the remaining batter and Isabel said: "I don't like pancakes with oats in them."
I then turned to Mark and asked, "Would you like some?"
He said: "I don't like wheat pancakes."
A vision of loveliness I was, standing there with uncombed hair and mismatched pajamas, holding a bowl of batter and shrilly berating my husband. Betty would never scold Don, nor allow him to see her in such disarray. I accused Mark of "poisoning the well," but I think what I meant was "poisoning the minds of our children." I hadn't poured my first cup of coffee and was not mentally agile.
Lately there's developed a little conspiracy between Isabel and Mark to make fun of me and my cooking. I have mixed feelings about this. On the one hand: infuriating. It's unhelpful for a grown man (George H. W. Bush is included in this indictment) to boast of narrow food preferences in front of children, pointing out the gory aspect of beets, the hatefulness of broccoli, a distaste for whole grains, etc.
On the other hand, dissent is healthy in any political regime and I like to think of the kitchen as a benevolent dictatorship with me, naturally, serving as wise and revered president-for-life. I don't want anyone to seriously challenge my supremacy, God forbid, and maybe the best way to avoid that is to give my subjects some freedom. Let the peons doodle mustaches on my image and quietly hum the Internationale so long as they show up at the dinner table and obey.
Plus, if it brings them closer together, cements a father-daughter bond to resist Mother and sneak cans of Chunky classic chicken noodle soup into the house during the Challenge (which they totally did yesterday) then pretend to "find" them on the pantry floor, maybe it serves the greater good. They can chortle about their hijinks for years to come, beside the fire, around the Thanksgiving table, laughing through uncontrollable tears at my memorial service. Yes, I want that for them.
Owen didn't hear the pancake commentary and is enjoying his pancake breakfast as I type. I intend to recruit the little boy to my side.
Posted by tipsybaker at 3/11/2009 07:19:00 AM

Labels: Eating down the fridge, food wars, pancakes
Email ThisBlogThis!Share to TwitterShare to FacebookShare to Pinterest