Waiter! There are raisins in the soup, my son is a blond, and I live in a strange city!

The last time I wrote on this sadly neglected blog, I described the night our dog almost died from eating chocolate. The other day, Gracie ate a large pellet of rat poison in the park and I took it as a mystical sign that I should re-start my dormant cooking blog.

Kidding. I recently took a leave of absence from grad school, which has freed up a lot of mental energy. I also cooked a really strange, delicious soup that I wanted to recommend. So I am typing.

Not that I don’t have a good excuse for the hiatus. It’s been a hell of a year. Both of our kids are now in college and Mark and I now live in Brooklyn. Last spring, Mark’s employer asked him to move to NYC and given that we were about to be empty nesters we said, sure, why not? Why not leave behind family, friends, temperate climate, elderly cats, the house where we raised children and chickens and goats and had happy memories and fig trees and a hand-built pizza oven to embrace, in middle age, a new life in a vast metropolis where we know hardly anyone?
Well, I can now tell you why not. Oh boy, can I tell you why not. But I can also tentatively tell you why to. While I can’t think about my old life without wanting to cry, the change of scenery has been exciting and interesting enough that I am able to avoid thinking about the old life for days at a time. My grandfather used to talk about people needing to “repot” themselves lest they stop growing. We repotted. We’ll see how much growing ensues. There have been moments when I have worried that shrinkage and regression will be the result of the move, but today I am feeling optimistic and am betting on growth. Watch this space.

Anyway, last week on a sunny, cold morning, Gracie and I went out for our usual hobble. She walks and tries to run, I hobble. The best thing about New York has been the walking and it was so unbelievably great that I walked and walked and walked — sometimes 8 or 10 miles at a go — until I injured myself (boring old person injury) and now the worst thing about New York is the walking because even a short trip to corner store gives me insight into what it must be like to be 90.

We were hobbling around in the park when I saw Gracie eating something that wasn’t the usual denuded chicken bone, but a rectangular green pellet the size of a lipstick. I yelled and she dropped the thing but snatched it up again before I could jerk her away. She swallowed it whole. We hobbled straight to the vet. After a delightful procedure that I was permitted to observe, the startled vet said, oh wow, yes, that’s rat poison. The good news: the rat poison was still almost completely intact and Gracie is fine. The bad news: there is rat poison lying around in Prospect Park.

We hobbled home from the vet to await the extreme weather of the polar vortex and I decided to make a strange, wintry cabbage soup I’d read about in The Dean & Deluca Cookbook. The soup contains kielbasa, cabbage, and golden raisins. Although I have since learned that it is fairly common to put raisins in cabbage soup, this was a first for me. Satisfying my curiosity about the raisins was the whole reason I wanted to make the soup; I think I may be more tempted by recipes that sound weird than recipes that sound good. 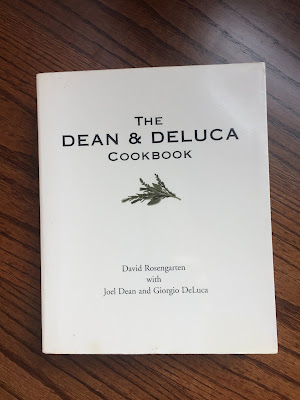 To be fair, the cookbook tried to make the recipe sound good. Here’s the headnote:
“There's a wonderful paradox in this soup (Waiter! There's a paradox in my soup!): it's filled with hearty ingredients and hearty flavors -- and yet, the overall feel of the soup is light and delicate. A guaranteed crowd-pleaser in winter.”

Guaranteed crowd-pleaser? Not exactly. The first night, I was tempted to throw away both Dean & Deluca and the soup. It was watery and cabbagey and the raisins were just bizarre. Two days later, Mark reheated the soup and brought me a bowl for lunch (my injury means I get served more often) and it was a completely different soup. A soup we both wanted to eat. They always say this about soup and stew, that the flavors need time to meld, but rarely has it been so true as it was with this soup. By day three, the raisins had given up all their fruity sugar to the broth, which was floral and sweet, and yet there was also spicy, meaty kielbasa in there, so it filled you up. For five days in a row I ate the cabbage soup for lunch and marveled at how good it was until finally today I realized the soup was on the downswing. Like the raisins, the kielbasa had finally given all its flavor to the broth and tasted like nothing. When the kielbasa tastes like nothing, the soup’s over.

You should try this recipe, though let it sit overnight before you serve it. This is a tasty, unusual, once-a-winter soup. I hope I can remember to make it again next winter.

The other recipe I made recently that went over big was Deb Perelman's beans on toast from Bon Appetit. It felt wrong to serve a dish like this, geared for picky children, to two unpicky adults, but I will probably do so again because it is so easy and tasty. This is exactly the kind of meal Owen would have loved when he was a kid. No more. When I dropped him off at college in August he was a dark-haired meat eater. 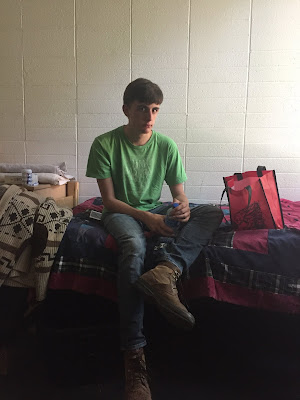 He returned to us in December a vegetarian blond. He could not be persuaded to touch meat, even when we went to the most tempting Chinese dumpling restaurant. I respect that. I’m not nuts about the hair, but he could not care less, which is as it should be. Our children have their own lives now and Mark and I are trying (!) to do the same. 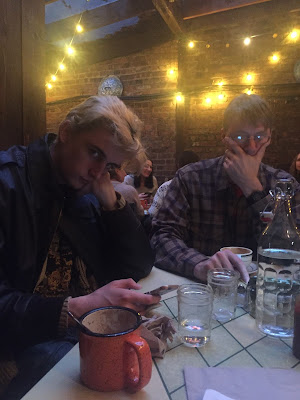