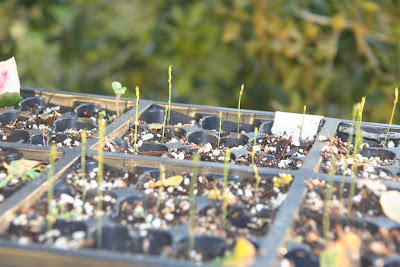 Unlike some people, I've been having mixed luck with seeds this year. There's a tiny, tragic graveyard of onion seedlings out on my deck; I set them there to get some fresh spring air, and they keeled over dead. I was sad.
On the other hand, who cares about onions when you have asparagus? See above. Very intrepid and cute. They were the last seed to germinate and I'd despaired, but then they all shot up a few weeks ago and have been impossible to discourage. Also doing well are the tomatoes, eggplants, and artichokes. The cardoon crop has already failed -- I pulled up one of the corpses and it had an 8-inch root, so I think it was feeling cramped in the little pot. I'm going to try planting cardoons directly in the soil when I have found a place for a dedicated bed. You can hardly ever find cardoons at the farmers' market and they're delicious, though I've never figured out how to cook them right.
Also, I'm worried about the worm box. Essentially, the seething masses of worms have ceased seething. I have theories about what's gone wrong, but it's too disgusting to describe in detail.
Posted by tipsybaker at 3/24/2009 07:38:00 AM