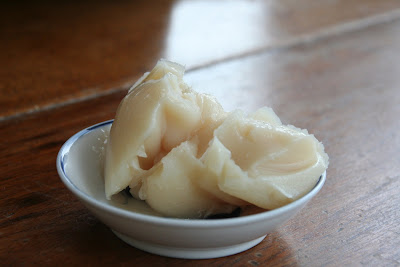 More than any other food, fat is a vehicle for our cultural biases, and no fat is more reviled in the United States than lard. (Ok, maybe tallow. Trans-fats don't count 'cause they're fake.) Lard is what the Deliverance hillbillies spread on their Wonder bread before going out to sodomize city slickers. A big iron cauldron bubbling in a barnyard, a screaming pig, a slatternly woman missing a few teeth. . . that's lard.
Lardo, on the other hand, is the ambrosial Italian pork fat with which Mario Batali tops his expensive pizzas at Otto. What a difference an "o" can make. And lardons? Succulent chunks of bacon on French frisee salads. Not just yummy but healthy and slimming! Clever French people. Duck and goose fat: also glamorous because they're French. Would restaurants still tout their "duck fat fries" if duck were the preferred cooking fat of El Salvador?
Meanwhile, chicken schmaltz is considered a little icky because Jews aren't as cool as the French. Chicken fat isn't, however, as icky as lard. No one is lower on the social hierarchy than white trash.*
The recent "nose-to-tail" sustainability movement has redeemed many unpopular parts of the pig and maybe soon we'll get over our silly lard-phobia which, as Jennifer McLagan persuasively argues in Fat, is completely irrational. Today I used some of my (overly) bounteous supply of home-rendered lard in a Shaker bread recipe courtesy of Bernard Clayton's invaluable Book of Breads. 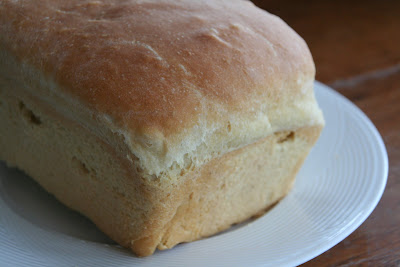 Nothing special, perfectly pleasant,  no telltale "piggy" flavor.
I also made Spanish-style lard cookies from McLagan's recipe, cookies that I will henceforth call by their daintier Spanish name, polvorones, as I do not want to have to eat all of them by myself. 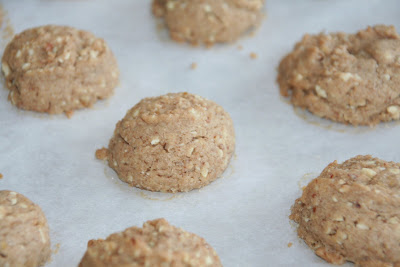 You make McLagan's polvorones by toasting ground almonds and flour, then mixing them with lard, orange zest, cinnamon, sugar, egg, and brandy. Bake for half an hour at a low temperature. I was skeptical of a lard cookie -- I only talk a good game -- but in fact, these were excellent, lightly spiced and shatteringly crisp. It's the lard! Or so I like to think.
You can read my story about the Obama vegetable garden here.
*You also find a lot of lard in soul food and Mexican cooking. I rest my case.
Posted by tipsybaker at 3/25/2009 04:24:00 PM