Eating Down the Fridge: If we run out of something it will be sugar 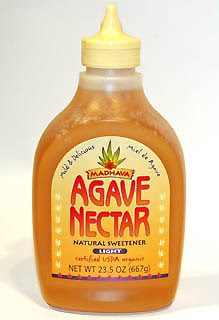 A few months ago, I read an inspiring story about the varied flavors of different sugars written by the visionary chef at Coi, a San Francisco restaurant where I ate one of the most bizarre, beautiful meals of my life (it included a savory pistachio marshmallow, about which I had mixed feelings.) Shortly thereafter, I bought a sack of palm sugar and a bottle of agave nectar, put them in the cupboard, and forgot about them.
Now, of course, there's the Challenge.
I've been a long-time lurker at 101 Cookbooks, the lovely, lovely, LOVELY  blog produced by Heidi Swanson. I'm fascinated and awed by people who calmly order their diets (and, I nervously suspect, their lives) around a set of wise and rational principles. Swanson appears to be such a one. I'm not going to run myself down -- I'm mostly fine with me -- but my body is not my temple, it's my playground and I sometimes worry that's an enormous mistake. Never more so than when I spend too much time at 101 Cookbooks.  Swanson uses only wholesome foods, like millet and honey and spinach and spelt, and her dishes always look wonderful. But until yesterday I never made any of them. I don't know why. Maybe I suspected my palate might be too crass; would her banana chip cookies or vegetarian split pea soup be fatty/salty/sweet enough for my greedy self?
But I had some agave nectar to use and I remembered her post about black bean brownies that contain no flour, very little butter, a cup of pureed beans, and nectar. Yesterday I baked them.
How were they? Weirdly, I found them far too sweet. Everyone ate them, and, yes, I revealed the secret ingredient. The beans aren't the problem, it's the agave nectar that makes them, to me, at least, cloying and sticky, the syrupy nectar overriding even the usually alpha chocolate. I would be willing to experiment further with agave nectar, but the bottle is now empty.
On to palm sugar. Sampling it out of the bag, my first thought was: dirty. It tastes of caramel, and coffee, and engine grease, and earth. But funkiness can grow on a person, as with pinot noir, gorgonzola, truffles. I decided to substitute palm for white sugar in Mark Bittman's buttermilk ice cream on the theory that the tart buttermilk would make a great, counterintuitive partner for the eccentric, tropical sugar.
It didn't. Owen took one bite, said, "Nope, I don't like this," and walked away. My mother and I ate ours, and agreed that it wasn't awful, but it wasn't right. Buttermilk just isn't the girl for palm sugar.
I remain convinced that he can find happiness; I'm trying this recipe next.
Posted by tipsybaker at 3/12/2009 02:05:00 PM

Labels: Eating down the fridge, palm sugar
Email ThisBlogThis!Share to TwitterShare to FacebookShare to Pinterest