How to Cook Everything Vegetarian: You're better off with Madhur Jaffrey 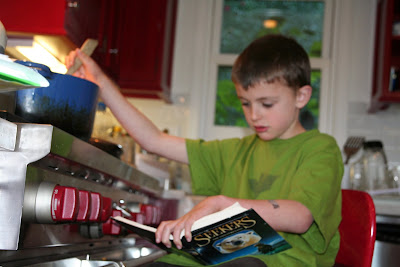 Cheese again, another of Mark Bittman's chewy paneers. I brought the children home from school via the supermarket and while I was unloading groceries, like horses to the barn they headed straight for the computer, leaving me to carry everything in. Little pashas, they are. I called them to the kitchen and gave them an embarrassing lecture about hard times and pitching in around the house and how I want them to be the kind of kids who help unload the groceries without being asked.  It went over like a platter of pig's ear salad. Isabel was unmoved and faintly scornful ("We GET it, Mom!") and Owen grew tearful and promptly vowed to help me with all my domestic chores. Which was sad. It turns out he's actually been listening intently to our conversations about jobs and money while pretending to play mindlessly with his light saber. He's a flake, but also a major worrier.
I put him to work stirring the paneer and lest this sound like an episode of The Waltons, he was soon whining that his arm ached and after the cheese was done, disappeared.
It has been frustrating me to pour all the whey from making cheese down the drain. The picture below is of whey. Got that? It's whey. 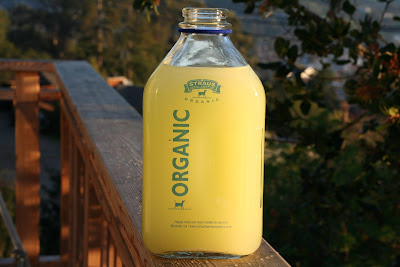 But what to do with it. The other day I was reading Anne Mendelson's authoritative and engrossing Milk: The Surprising Story of Milk through the Ages and she suggests you drink whey: "It is delicious poured over ice with a pinch each of salt and crushed dried mint. . ." I'm not going to do that, but she also includes a recipe for bulgur pilaf cooked with whey and I am going to do that.
Anyway, we had what may be the final all-How to Cook Everything Vegetarian meal and it included:
-biryani, the classic Indian rice dish, into which I put the paneer. I crave paneer and bland cheese almost as much as I do spicy food. A cube of essentially flavorless paneer, ricotta, or fresh mozzarella -- so restful, like a white room.
-dal. The best recipes for dal call for frying the spices, ginger and garlic before adding to the lentils, which softens their pungency. Bittman, in his usual streamlining style, skips the tempering step and has you put everything in the pot all at once, which yields a harshly flavored dal. I often appreciate the way he simplifies recipes, but this is one corner that shouldn't be cut.
-aloo paratha/flaky potato flatbreads for which the recipe was not detailed enough. A diagram of how to roll these out would have helped immensely. I winged it and these were a mess, with mashed potato filling squishing out of the wheaty little discs. They were actually tasty this way because the bits of extruded potato acquired a delectable, crispy crust, but: not quite right.
-nut chutney. Yummy ground cashews and spices, a crunchy sprinkle rather than a jam or sauce. Like I've always imagined dukka. 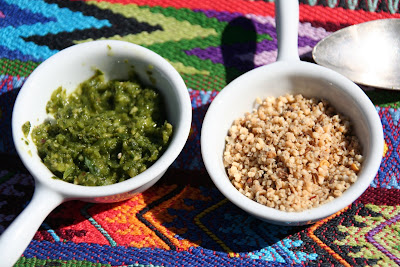 -mint and cilantro chutney. Fiery, damp, green.
-honey spice cake. The one dud so far in Bittman's astonishing cake section, porous and dry. ((UPDATE: Changed mind. The cake was perhaps too modest to serve after a big dinner, but I just had another piece and it's great. More of a daytime cake. I am trying to resist getting another slice.))
I go back to what I said the last time I made an Indian meal from Bittman: you're better off with an Indian cookbook. Everything was fine, but Indian food can be so much better than fine.
Posted by tipsybaker at 3/07/2009 02:07:00 AM

Labels: How to cook everything vegetarian
Email ThisBlogThis!Share to TwitterShare to FacebookShare to Pinterest