Roughly a decade ago, I dined at Prune restaurant in New York City and what I remember most vividly was the craggy chunk of dark chocolate that arrived with the check. It looked like it had been hacked from a chocolate mine with a pick and it was absolutely delicious. I believe the waitress said it was Callebaut 60%, though now I can’t remember exactly. In any case, I went home and ordered an 11-pound slab of Callebaut 60%. That’s a gigantic piece of chocolate but I wanted to be able to hack off craggy chunks of my own. I’ve kept a gigantic slab of dark chocolate in my pantry ever since. I pulled it out last Saturday to make the olive oil shortbread with rosemary and chocolate chunks from Smitten Kitchen Every Day. What a great little cookie. You chop some dark chocolate and stir it into an easy shortbread dough made with olive oil rather than butter, along with some minced fresh rosemary. The shortbread is gritty, slightly salty, and wonderful. I know. Rosemary in dessert. Yuck. And olive oil too? It’s a hard sell. But it works.
That was Saturday. Around 1 a.m. on Sunday I was awakened by noise from upstairs. Thumping sounds, then tearing sounds, then dragging sounds. Then some more tearing sounds, then some crashing sounds. I went upstairs. The dog was racing around the living room and kitchen in the dark looking for stuff to chew and destroy. She was all amped up like I’d never seen her before. I figured I hadn’t exercised her enough the previous day. I talked to her for a few minutes, tried to settle her down, and went back to bed. More rampaging. Odd. I went up again and only then did I notice that the pantry door was open and when I looked inside I saw that the block of Callebaut chocolate had been dragged off its shelf and was lying on the floor, scored with toothmarks. I would estimate Gracie ate a hunk of dark chocolate about the size of a pork chop, one of those big, thick loin chops. 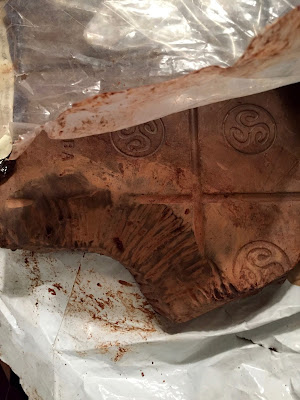 It’s hard to kill a dog with chocolate — some milk chocolate chips or a piece of chocolate cake won’t do it. But free access to an 11-pound slab of dark Belgian chocolate? Chocolate is toxic to dogs and Gracie was very, very sick. According to the vet, the typical pulse of a dog her size is 100 BPM and Gracie’s was 250 BPM when we got to the pet hospital in the middle of the night. To protect her privacy and dignity, I will refrain from sharing the indelicate details of her detox, but I assure you, it was dramatic.

Alone in the waiting room of the pet hospital at 3 a.m., slouched on the vinyl couch beside the Christmas tree, I found myself gazing back, as if through a very long tunnel, at a younger, peppier me sitting at the counter at Prune, all dressed up and enjoying an experience that would lead me here, to a pet hospital almost a decade later. I find those strange threads of connection between events mysterious and fascinating. I don’t know why, I guess because they give a glimpse of the chaotic way life actually unfolds.
Lessons learned: Life is uncanny. Put your chocolate on the top shelf when you get a dog.
Gracie made a full recovery, thank heavens.


On another subject, I went to my last-ever holiday concert for the high school band in which Owen has played trombone these last four years. It was poignant and beautiful in that high school band concert way. The gym repurposed as concert hall. All those kids in their formal wear, earnestly performing Handel’s “Messiah” pretty darn well. The jovial music director who somehow taught a bunch of teenagers to perform Handel’s “Messiah” pretty darn well. The middle-aged parents smiling peacefully, enjoying the rare moment when it would be truly shaming to look at their phones. The one small annoyance of the evening was that no one bought the cookies I brought to the bake sale. Fools!
Posted by tipsybaker at 12/14/2017 10:41:00 AM 372 comments


School is over for 2017. When I turned in my final paper and walked out the door of Room 6 the other day I felt like I’d taken off a heavy coat and a tight girdle, both at once. I love the learning part of school, but academic writing is a whole new sport and I’m extraordinarily bad at it. None of the writing muscles I’ve developed over thirty years are useful in the academic genre and it’s maddening not to be able to use them. It’s like I’m a pole vaulter trying to do the hammer throw.
I wrote my paper about Sarah Orne Jewett’s The Country of the Pointed Firs, a cozy 1896 novel about life in a coastal New England town. If you haven’t read it, brew yourself a mug of chamomile tea, curl up by the fire, and give it a try. Prepare to be charmed and perhaps a bit bored. I initially loved this book, but there was something about it, something small, that rubbed me the wrong way, and I decided it would be fun to try to identify and explore that small, annoying thing in my final paper.

It was not fun. I started researching and brooding and rereading Country of the Pointed Firs and I ended up writing a 22-page paper about why I absolutely hate Country of the Pointed Firs which is like writing a paper about why you hate bunny rabbits.
And yet I somehow convinced myself, if not the professor, that Country of the Pointed Firs is a “dangerous” book. Do I really think so? I have no idea, but once I start arguing a case I can’t stop, like a pit bull whose jaw locks when she sinks her teeth into the tender neck of a toy poodle.
That’s a myth, of course, that pit bulls have locking jaws. They have perfectly ordinary jaws. I actually don’t have more to say about school or academic writing, I want to talk about pit bulls.
When I started idly looking at dogs last summer, the pit bull was the one breed I would not consider. First of all, vicious. Second, ugly. My feelings about pit bulls were shaped by a notorious 2001 case in which two pit bulls attacked and killed a San Francisco woman in the hallway of her apartment building. Except here’s the thing: the dogs that attacked her weren’t pit bulls. They were Presa Canarios. But in my memory for the last 16 years they were pit bulls. Weird how that happens, but it happens a lot with the poor pit bull. The parallels with racial prejudice seem obvious to me.
Anyway, I didn’t adopt a pit bull. I adopted an adorable, scrawny boxer-whippet mix. So it was a little irritating when a kid on the street one day patted Gracie and said he loved pit bulls. I gently corrected him. Someone else pointed out that the tip of her tail was white, typical of the pit bull. I explained Gracie was a boxer-whippet mix. Then, a month or so ago, a woman I talk to all the time at the park said, “You know, Gracie looks a little pitty to me.” My heart sank. She looked a little pitty to me too in some lights and I didn’t like those lights.

To settle this issue, I took a swab of her saliva and sent it to a doggie DNA lab. It turns out the shelter hadn’t been lying, Gracie has boxer and hound ancestry. But they had declined to mention, or perhaps did not know, that she is half pit bull. Or, I should say, American Staffordshire Terrier.
I’m ashamed to admit that I was unsettled and instantly my beloved Gracie became less cute to me and for a few days I wondered if her boisterousness wasn’t actually worrisome aggression. Then I read Pit Bull by Bronwen Dickey, a book I highly recommend if you accidentally adopt a pit bull. The pit bull hasn’t always been America’s most reviled dog. Helen Keller owned a pit bull and so did Teddy Roosevelt and Laura Ingalls Wilder. The pit was once considered a delightful and trustworthy family pet. But since the 1970s, it’s been the dog we enjoy villainizing, the dangerous Other of the canine world. I wouldn’t suggest anyone rush up to a strange pit bull with a spiked collar and start hugging him, but I’ve gotten to know a whole bunch of pit bulls and pit mixes since I started paying attention to dogs, and they’re pretty much all sweet, a few of them ridiculously so.
After finishing Pit Bull, now completely woke about dog prejudice, I decided to do what I could to promote pit bull tolerance, like, I don’t know, actually telling people my cheery, petite, ebullient puppy was a pit bull mix?
Shortly thereafter Gracie and I were walking on our favorite trail when we encountered a woman with a gorgeous Australian shepherd puppy on a leash. The woman and I exchanged info about the breeds of our puppies and watched them romp for a minute or two. It was very chummy. We said good-bye and after we’d walked on for thirty seconds, Gracie couldn’t resist and ran back to play some more with her new pal. In the course of playing she “bit” the dog on the neck. I put “bit” in quotes because there is “biting” and there is biting. When puppies play they will “bite” their partner with a soft mouth, in other words, they don’t clamp down, they don’t exert pressure, they don’t truly bite. Gracie has joyfully “bitten” and been “bitten” by probably 100 dogs and never once has she hurt another animal. She doesn’t bite. Ever. I was approaching to grab Gracie’s collar when the woman started saying with an edge of hysteria in her voice: “Stop the biting, I don’t like that biting!” and then she shouted: “GET YOUR DOG!!!”
It was ludicrous. I understood she was anxious, but it was ludicrous. Nothing like this had ever happened before. Did she overreact because I’d told her Gracie was a pit bull mix? I pulled Gracie away and apologized, adding, “This is actually very normal puppy play.” The woman glared at me and walked away. I walked the other direction and thought, I bet she’s going to tell people about how she met this horrible pit bull on the trail who bit her puppy.
Typing this anecdote I really wanted to include certain details that would make the woman look precious and icky, portray her as the type of woman who would overreact to learning a puppy was a pit bull mix. You know, sort of like . . .  me a few months ago?
Typecasting is typecasting. It’s all pernicious.
Dog ownership has been fascinating. I learned a lot this fall in the classroom, and even more from owning a dog.


On another subject, if you want to read a wonderful “unabashed appreciation” of Deb Perelman of Smitten Kitchen, check this out. I bought Smitten Kitchen Every Day and I’ve made the broccoli melts twice (recipe is also on her blog) and foresee making them a hundred more times. Easy, delicious. Her sausage, kale and crouton saute is also easy and great. Now that I’ve shucked the heavy coat and tight girdle of school, at least for a while, I hope to do more cooking and pole vaulting.
Posted by tipsybaker at 12/08/2017 11:03:00 AM 165 comments