Swimming sadly under a small pond of ketchup 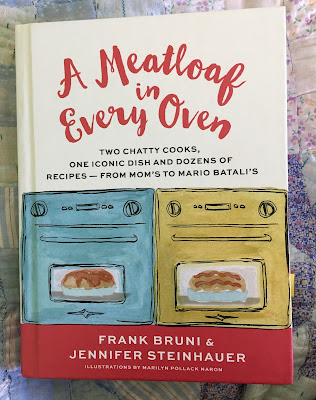 I caved and bought A Meatloaf in Every Oven by Frank Bruni and Jennifer Steinhauer, not because I wanted a meatloaf cookbook (I so didn’t) but because I’ve always loved Steinhauer’s writing and consider Bruni’s book about colleges essential, sedative reading if you’ve got a kid slogging through second half of high school. The two New York Times writers bonded over meat loaf (“In a given series of emails we’ll toggle from Senate filibusters to sauteed shiitakes, from Obamacare to oregano.”) and I expected their collaboration to be funny and clever. It doesn’t disappoint.

Tasty sample passage: “Perhaps this is your personal memory of meatloaf: someone’s mother’s overcooked, underseasoned, sort of needlessly, unpleasantly crunchy slab of meat, swimming sadly under a small pond of ketchup. Not that we hate ketchup. In fact, we embrace it. We date it. We want to marry it. But we also want it to see other people.”

There are chapters here devoted to lamb meatloaves, classic meatloaves, meatless loaves (tuna melt loaf, kasha loaf), and meatloaf side dishes. In their day jobs, Steinhauer and Bruni report on politics and the penultimate chapter collects meatloaf recipes contributed by members of Congress. Chuck Schumer cooks barbecued chicken in the same pan with his very plain meatloaf, which does not appeal to me at all. Nancy Pelosi makes a bison-and-veal loaf — “and things get mysterious with the appearance of cumin.” Paul Ryan shoots deer, grinds them up in his own power grinder, then desecrates the poor venison with Lipton onion soup mix and Progresso breadcrumbs. I’m sure it’s lousy. Paul Ryan is dead to me.

Now, if Adam Schiff had a meatloaf recipe. . .

Last night, I tried out the Swedish meatball loaf, an homage to Ikea’s Swedish meatballs which I have never tasted, though apparently the company sells a billion of these “bouncy” textured meatballs per year. You flavor a beef-pork-onion-bread-egg-cream melange with nutmeg and allspice, bake, top with a creamy gravy and some raspberry jam. The meatloaf required significantly more time in the oven than indicated to reach the suggested internal temperature, but otherwise the recipe worked perfectly.  Isabel (home for spring break) brought a friend to dinner and he complimented the meatloaf. It may have just been good manners, but he seemed sincere and I glowed with matronly pride. In any case, he didn’t get someone’s mother’s overcooked, underseasoned, sort of needlessly, unpleasantly crunchy, slab of meat.

Although I didn’t really want a meatloaf compendium, I suspect I’ll use this one a lot. Meatloaf is easy, cheap, and satisfying, and flipping through the book this morning I wondered if I could get away with making meatloaf again tonight. (Conclusion: No one would mind but me and I would mind.)

On another subject, I have mixed feelings about the writer Walter Kirn who can be a sour, contrarian cuss, but he’s never boring and he wrote a big-hearted, sad, inspiring essay in this month’s Harper’s. I urge you to seek it out in print if you can’t get past the paywall. Without listening to the radio or checking the internet, Kirn drives from Montana to Las Vegas through Idaho and the “big and biblical” landscape of Utah, observing and pondering what he encounters in the physical, visible world, from bumper stickers and elderly McDonald’s cashiers, to mules, truckers, and Mexican restaurants. There’s a lot of wonderful stuff in this essay. I would like to have the haunting final sentenced tattooed — or maybe branded — on my forearm so I have to look at it every time my twitching hand reaches for the phone for a quick, agitating, empty Twitter fix:

“In a supposedly post-factual time, deep attention to the passing scene is a radical act, reviving one’s sense that the world is real, worth fighting for, and that politics is a material phenomenon, its consequences embedded in things seen.” 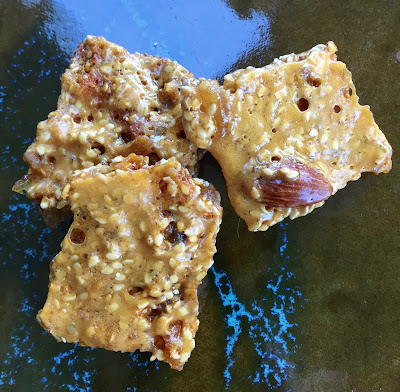 David Plotz, CEO of Atlas Obscura and longtime host of the Slate Political Gabfest, wrote a cracking review of Samarkand and Taste of Persia the other day in the Piglet, but one line stopped me cold:

“I ended up cooking a full meal from each book: A soup, a vegetable, a starch, and a meat.”

Pardon? What kind of “full meal” has a soup course, but no dessert?

I wondered if perhaps Taste of Persia and Samarkand didn’t contain any appealing sweets, but feast your eyes, my friends 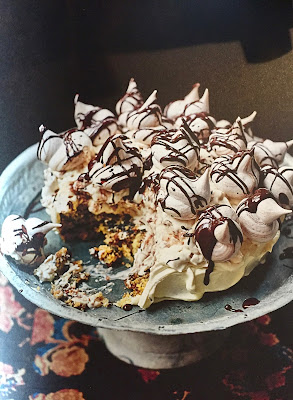 I decided to make one.

I haven’t learned the origins of the Ruining a Russian Count’s Castle cake, nor the source of its name, as research materials on Uzbek cakes are scant, even online. But then I only spent about seven minutes looking. What I do know about Ruining a Russian Count’s Castle: You can use a base of profiteroles, meringue, torte, or sponge cake. Atop whatever base you opt for, heap a mound of cream, stud with meringues (cocoa-flavored or plain), and drizzle chocolate over all. Here’s the range of ways a Ruining a Russian Count’s Castle might look. What a world.
I had my doubts about the Samarkand recipe. The base cake was dense and flat, barely an inch tall, and full of prunes and walnuts. The whipped cream topping called for heavy cream and sour cream but no sugar. This felt wrong, so I added sugar (and would do so again.) The instructions have you slather some of this cream on the cake, then crush a few of the cocoa meringues into the remainder of the cream so you can create a stiff mound that will hold the rest of your little meringues. You end up with a wonderful monstrosity of a cake. 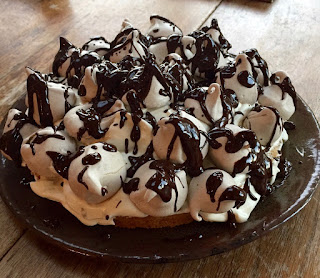 This seemed like a novelty cake, a stunt cake, and I didn’t expect it to taste good. But we loved it. There’s so much going on. You’ve got your little crispy meringues to nibble on, then a layer of cream with delectable bits of sugary crushed meringue. Beneath this you get to the layer of pure, tangy cream and then the dense, nutty torte. As soon as you get tired of any one element, you can move on to another, and they're all delicious. Mark asked if the fruit in the torte was cherry. It’s a good sign when someone thinks a prune is a cherry. I was sorry to have to tell him otherwise.

Total delight this cake, both the idea of it and the thing itself.

I also made an easy sesame-ginger brittle from Samarkand and have spent the last few days trying not to eat it all up at once. You boil honey, sugar, and water together, add sesame seeds and whole almonds, cook for a bit, add butter, candied ginger and baking soda, pour over a cookie sheet, cool, break into shards, eat a caramelly, crunchy piece, try to resist eating a second piece, eat a second, try to resist. . .  and so on. Ten minutes to produce this tasty treat. Fifteen max.

Inconsiderate Food52 once again scheduled the Piglet to begin during so-called “Ski Week” when there’s no school and a lot of people go skiing. We don’t ski, but I took Owen to see some colleges and wasn’t able to bird dog the competition the way I would have liked.

Or would I have liked? While I’ve been reading the Piglet judgments loyally, I just haven’t gotten excited yet and have no strong feelings about any of the books. Is it because there have been no rude, controversial, totally lame judgments? Because I’m obsessed with politics, not cookbooks?

A little spring cleaning before moving on to new cooking adventures:

*Alton Brown’s Big Fat Greek Chicken Salad is a great, healthy chicken salad, full of protein, vegetables, Greek yogurt, feta, olives, and flavor. It’s a dream dish if you’re on a low-carb diet which I was for a couple of weeks. I put some of this in a Mason jar to take on the airplane when Owen and I went to look at colleges and it wasn’t half as embarrassing to eat while sitting in the middle seat as I thought it would be. I used rotisserie chicken. Worked great. You should try it.

*Low-carb diet ended abruptly the first night in Savannah, Georgia at a barbecue restaurant. I made it through the savory portion of the meal without succumbing to starchy sides, but then pear cobbler and sweet potato pie happened. Southern dessert are so generous and sweet and fat and forgiving. I love them bigly. No regrets. The sad thing is (or maybe it’s the happy thing), I didn’t feel any worse after eating all that sugar than I had during my abstinence. I slept fine, plenty of energy, good mood, didn’t balloon overnight, wasn’t suddenly overcome with cravings. The next day: fresh shrimp, boiled peanuts, peach cobbler. Heaven. Continued to feel great. Owen determined that he loved the Savannah College of Art and Design and so we moved on to the next leg of our journey where there were no tempting carbohydrates.

*Rural western Pennsylvania. Terrible food and we saw more Confederate flags than we had in Savannah, where I don’t think we saw any at all. I don’t have much nice to say about our experience of rural western Pennsylvania, so I will be brief. We toured one sweet college and we were supposed to tour another but there were addicts in the hotel parking lot and bed bugs in the bed. I told Owen he could not go to school in a town where this was the highest rated hotel on TripAdvisor. Feel free to call me a snob, but you did not see those bed bugs.

*So we skipped the second school and drove to New York City instead. Brilliant decision. Cronuts at Dominique Ansel, halo halo at Lumpia Shack, a Monte Cristo sandwich at Shopsin’s, steak at Peter Luger, a grilled cheese sandwich at Marlow & Son. . . . plus some sightseeing, theater, and Pratt. One of my favorite trips ever.

Now we’re home in California and I should probably go back on my low-carb diet before the good fruit starts coming in.