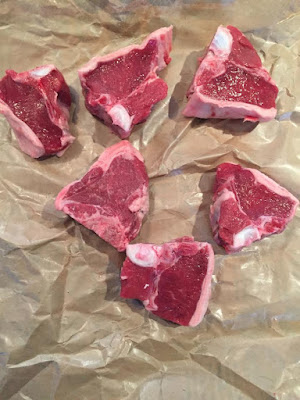 I saw the jug of unsweetened almond-coconut milk in the fridge the other morning and got this idea that it would be tasty mixed with vanilla protein powder and the cold coffee left at the bottom of the pot. High protein! Low carb! Caffeine!  Like a treat, if not a treat. So I made myself a big dishwater-colored “shake” and sucked it all down in about 20 minutes. What happened next helped me understand how all how those mysterious liquid diets work. My appetite was obliterated. Nuked. Razed. I didn’t feel satisfied so much as blunted and dull, but I did not think about food for the rest of the day.

Ten hours after the shake, I made dinner, and even then I had little interest in eating. I made the lamb chops from Naomi Pomeroy’s Taste & Technique, which I had hoped would be as extraordinary as the salmon from the night before. The method was almost identical: You sear your meat in oil in hot pan, add butter, finish in the oven, basting with the butter. Results: fine. Nothing special.

Last night, I tried Pomeroy’s method for cooking chicken breasts which is — guess what? —  almost exactly the same as her method for cooking salmon and lamb chops. Sear in pan on stove, add butter, finish in oven. A few fussy steps in there, easily eliminated. I think the key to this recipe is that she has you brine the chicken for an hour, which transformed the drabbest meat on the planet into something pleasantly salty and alluring.

I like this book and its plain, satisfying dishes. As always, once I get started with a book, I want to try everything.

On another subject, you know that hideous moment when you go to take a picture with your phone and it reverses and suddenly you’re treated to the image of your own face from a severely unflattering angle that accentuates double chins and wrinkles? I’ve always thought there should be a name for that moment and when this horrible thing happened to me the other day as I was preparing to photograph lamb chops it came to me: Screamshot. Genius. I told Owen, who was the only other person in the house, about my new word, and he looked at me with utter disdain. He said everyone in the world was already familiar with the phenomenon and “screamshot” was an incredibly dumb name. Why would anyone want to scream?

There’s a word for someone who asks that idiotic question: sixteen.

Crazy and complicated, plain and simple

Just when you think you’ve licked your addiction, a day like yesterday comes along and Twitter gives gives gives and then gives some more, like a broken slot machine. Mark and I were recovering from a rich dinner and slightly queasy new episode of Girls when I checked my phone one last time and whoa. If you know what I’m talking about, great. If not, go read a newspaper! Today I met someone who had no idea what was going on in the world and while this is often sane and refreshing, sometimes I want to say: Dude, you are missing out.

Anyway, I didn’t sleep well after several hours of Don Lemon and Twitter, but in fact the insomnia had more to do with the rich dinner I served than the news. Pivoting now to cooking.

As cookbook lovers know, Food52 announced its 2017 Piglet finalists yesterday. I own several of the titles (Koreatown, Deep Run Roots, Dorie’s Cookies), know something about a few others (Simple, Sirocco), and hadn’t heard of most the rest. At the library, Naomi Pomeroy’s Taste & Technique was on the new arrivals shelf so I grabbed it. This handsome book will teach you to make aioli, braise short ribs, and saute kale, presumably, hopefully with better results than ever before. After flipping through the book a couple times, I was respectful, if not bubbling over with enthusiasm. After cooking a meal from its pages, I am respectful and more enthusiastic, if not bubbling over. It takes a lot to get me bubbling these days.

To make the vegetable, you immerse trimmed green beans in a pint (!) of warm olive oil and let them simmer very gently for an hour or so until they’re drab and almost falling apart. I thought I didn’t like overcooked green beans, but it turns out I do. They required a lot more salt than the recipe indicated and a slightly longer cooking time, but otherwise the recipe was flawless and the beans very, very good. I may re-use some of the oil to try the long-cooked broccoli variation.

The salmon was even better. The salmon was sensational. Probably the best technique I’ve tried for cooking salmon, and I’ve tried plenty. You season your salmon filet then sear, skin-side down, in a hot, oiled skillet for three minutes. Melt a hunk of butter in the pan, baste the top of your fish, pop in the oven for a few minutes, baste some more, and serve. You could add lemon and capers to the butter, I suppose, but it was delicious as was. My one qualm: It was superrich, particularly when served with green beans poached in a pint of olive oil. But we loved this salmon, loved this meal, and I have already decided what dishes to try on Thursday and Friday nights.

Today I put the leftover salmon into a green salad dressed with the cacao nib vinaigrette from Alton Brown’s EveryDayCook. Salmon and chocolate vinaigrette? I know. But it was fine. I made the dressing a few days ago and have used it on several salads with lovely results. You grind some cacao nibs, infuse into olive oil over low heat, mix with shallots and balsamic, and end up with a unique and tasty vinaigrette that would work especially well, I think, on a salad of spring greens, fresh cherries, and cheese. But it worked great on salmon salad, too.

*The fudgy mocha brownies from Dorie’s Cookies overwhelmed me. Too tall, too bulky, too nutty, too much chocolate, too much coffee. I served these bruisers to my in-laws, who are chocolate fiends, unlike me, and even they approached them cautiously. Not a fail, but I wouldn’t make them again.

*The narrative of villainy and greed that unfolds in Jane Mayer’s Dark Money beggars belief. I had taken it on faith that the Koch brothers were evil because that’s what the people I respect and the news media I follow always said. But I couldn’t have told you why the Kochs were awful; I would have muttered something vague and tried to change the subject. I’m only on disc 7 of this audiobook, but I can now tell you why the Koch brothers are terrible in gruesome detail. The narrator mispronounces a word every ten minutes or so, but otherwise does a great job with this informative and enraging book.

*Finally, I enjoyed this interview with Slate book critic Laura Miller. You should read it for yourself, but here is my favorite passage: “It’s such an act of grace to give someone else ten or fifteen hours out of your own irreplaceable life, and allow their voice, thoughts, and imaginings into your head. I can’t respect any writer who isn’t abjectly grateful for the faith, generosity, and trust in that. I think there’s an unspoken, maybe even unconscious contempt for reading as merely “passive” in many people who obsess about writers and writing.”

I am abjectly grateful to anyone who has given the last seven minutes of their own irreplaceable life to allowing my voice, thoughts, and imaginings into their head.
Posted by tipsybaker at 2/15/2017 05:59:00 PM 55 comments

All cookbooks and cooking this morning. Dad, you don’t need to keep reading.

I want to make every recipe in Dorie’s Cookies and if I were skinny I would do so in an orderly and compulsive fashion starting today. I love this cookbook.

First of all, it’s gorgeous — bright and brash and almost abstract. It really pops in the sea of muted, matte-page books with their scenes of staged rusticity. The close-up shots of cookies depict them not as trivial consumables, but as strange, magnificent objects in and of themselves. It’s a big departure for Dorie whose previous books were somewhat stodgy in their design, as Gabrielle Hamilton pointed out in her unfriendly review of Around My French Table. I wonder if Hamilton’s sharp remarks stuck in the back of Dorie’s head. (I am calling Dorie “Dorie” because she seems to be inviting that with the name of her book and her friendly persona. Calling Gabrielle Hamilton “Gabrielle” would be unthinkable.) 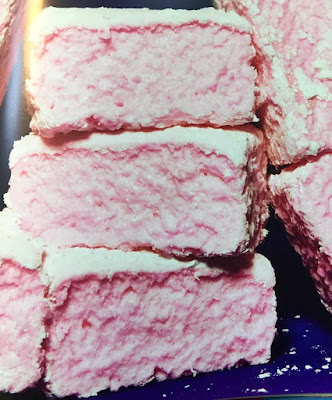 In addition to being lovely to look at, Dorie’s Cookies is a big, heavy book. You can get lost in its 482 pages. Hundreds of recipes, countless variations. Amplitude. Bounty. Generosity. Wonderful qualities in a cookbook. 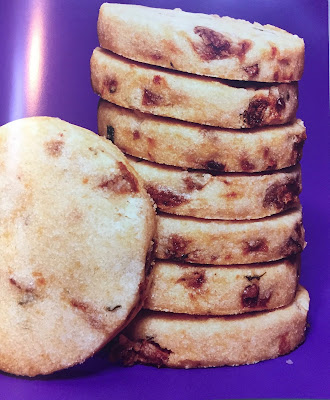 But is there really anything new left to say about cookies?

To quote an amazon reviewer:

Exactly. There are classics here, but there’s a lot of invention too. I usually approach inventive recipes with caution, but I’ve made scores of Dorie’s recipes over the years and can only remember a few duds. She anticipates your questions. She warns you of pitfalls. She tells you that the dough might crack and what to do if it does. She offers alternative ingredients in case you don’t have espresso beans on hand. I would guess that in elementary school, Dorie Greenspan sat in the front row and always did the extra credit. Even though she was the teacher’s pet, everyone loved her because she was truly nice.

She’s not a schoolgirl, though. She’s a total pro.


That’s a long preamble to a paragraph about a simple recipe, the first I’ve made from the book. The coffee malted is a basic butter cookie flavored with malt powder and coffee. Easy. Unusual. Delicious. I “whipped these up” just before my in-laws arrived for dinner last night. My father-in-law ate about a half dozen, my mother-in-law probably ate three, Mark made an ice cream sandwich with his, I ate two and 2/3 cookies, and Owen, the only underweight member of our party, ate 1/3 of a cookie.

The other dish I served my in laws last night wasn’t so awesome. If you’re tempted to try the pork shoulder with pineapple, sesame, and broccoli in this month’s Bon Appetit, I would suggest you don’t. It’s just too tricky. The recipe says to cut a pork shoulder into 1-inch steaks, but doesn’t account for how fatty and ungainly a pork shoulder is. I ended up with these disjointed, floppy, uneven steaks, something Dorie never would have countenanced. I could have really used some advice. The meat required twice as long on the stove as indicated and was still rare in random places. One bite was fatty and tough, the next dismayingly soft and pink. The broccoli and pineapple added little. I was bummed.

Pork with pineapple and broccoli: C-