How to Cook Everything Vegetarian: Earnest Summation 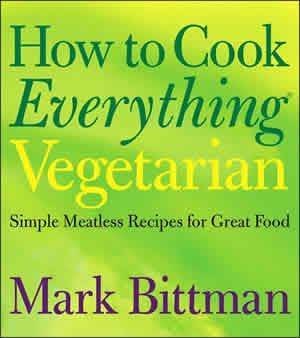 First, the stats.
I made 63 dishes out of How to Cook Everything Vegetarian.
Worth the price of the book: 7
Great: 13
Good: 25
So-so: 18
Flat-out bad: 0
A stunning performance. Although Alice Waters' Art of Simple Food scored a tiny bit better, I prefer How to Cook Everything Vegetarian for its scope, imagination, flexibility, and general friendliness. Mark Bittman's recipes are easy and mostly wonderful. Not a single complete dud out of 63 recipes? Dude.
A few criticisms: There are a number of trivial errors in here, repetitions, discontinuities, obvious goofs. For instance, in the intro to his recipe for cheese shortbread: "After just one of these crisp, melt-in-your mouth snacks you'll never want another of those bright orange cheese puffs (gougeres.)"
I think he means Cheetos. Particularly because he published a recipe for gougeres in How to Cook Everything where he describes them as "almost perfect finger food."
Significant? Of course not. This is small stuff in a great, fat, generous book. He's bitten off a lot here, which is admirable. He just needs a proofreader.
Other little problems: I don't like his breads. Maybe because he's wedded to his food processor and I'm wedded to my stand mixer, his recipes never work for me. (Question: Is there's a gender divide over processor vs. mixer? I decided there may be after spending a month with Bittman and then reading this. Any smart girl in that boy's situation would get money out from under the mattress, go to Target, and buy a mixer just like her grandma has on the formica counter back in Brigham City. The girl knows it's a lifelong investment; the boy thinks it's. . . effeminate? bourgeois? money better spent on a meat grinder or fancy knives or a Bose radio? Silly boys.)
Back to Bittman: While his breads disappoint me*, I have other cookbooks I can use for baking. And if you really want to delve deeply into a specific cuisine, or a specific dish, or bread, you should go to a dedicated cookbook anyway. Bittman is a generalist. He's not aiming for the most authentic, best-of-show saag paneer, or tamale, or sandwich bread. What he wants is to give you the confidence and know-how to make not so much everything as anything, using ingredients you might find at Stop & Shop. He's an enabling cook, not a prissy standard-bearer, and we need that.
I don't want to leave the impression there aren't spectacular recipes in this volume. Because there are. Just when you think "everything" is pretty good, but never spectacular,  you stumble across some recipe so casually dazzling and scrumptious that you want to write it on your kitchen wall. For me, that was the nut chutney, page 784, one of the most crazy delicious things I've ever tasted. Over a few days, I ate almost the whole recipe myself, which has not helped my slimming regimen. Worth the price of the book three times over. (Though I only counted it once.)
*I don't include his phenomenal no-knead bread in this criticism. I've made said bread, as has half the world, and it's truly a miracle, even though it melted the knob off my dutch oven. The no-knead bread doesn't appear in this book.
Posted by tipsybaker at 3/13/2009 12:40:00 PM

Labels: earnest summation, How to cook everything vegetarian
Email ThisBlogThis!Share to TwitterShare to FacebookShare to Pinterest