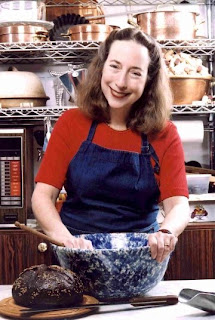 Yesterday, I saw Scate Bakes' admirable resolution to read Rose Levy Beranbaum's master's thesis, "Sifting Flour Affects the Quality of a Yellow Cake." I thought this was a joke until I clicked on the link. It turns out that there is such a thesis* and it's fascinating, not so much for the science of sifting as for what it reveals about the mental processes of the woman who wrote it. If you don't want to read the whole thing, though I recommend skimming it, you should do as Beranbaum suggests and scroll down to her addendum.
I own Beranbaum's Cake Bible but have never warmed to its stiff and prissy perfectionism. I grow weary even thinking about halving egg whites. But yesterday afternoon I was at Barnes & Noble and, inspired by that strange thesis, pulled out Beranbaum's Bread Bible. The whole tone was different, looser, funnier, more effusive. She still comes across as obsessive and kooky, but in a charming way. I almost bought The Bread Bible, but have forbidden myself new cookbooks.
Today, I read this Believer Q&A and like Beranbaum even more.
*I just pulled out The Cake Bible and see that Beranbaum writes in the introduction about showing her master's thesis to her husband on their first date. Oddly, she says she got an A+ on the thesis, when in fact she only got an A. That's a revealing little slip, not something you'd expect from such a perfectionist. Except, of course, it makes complete sense.
Posted by tipsybaker at 4/08/2009 06:28:00 AM