Fat: Just like in that show with Colin Firth 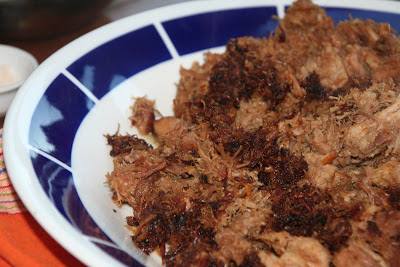 There's a virtuous, pallid and purportedly beautiful young woman we're all supposed to revere even though she's boring as all hell. Let's call her pork loin. She has a saucy, less conventionally pretty sister who anyone with a trace of discernment recognizes as the real prize because she's playful and witty. That's pork butt.
Everyone always ends up coming around to the fun sister in fiction, but not so in the supermarket. I totally do not get why loin costs more than butt when the butt is so clearly the superior meat, moister, tastier, far easier to cook. They practically give it away. Because it's called "butt" instead of "shoulder," which is the anatomically correct designation? Pork shoulder is so declasse you sometimes can't even find it at Whole Foods. White people are nuts.
I know a dozen great ways to cook pork butt, but carnitas is probably the best. I made Jennifer McLagan's recipe last night out of Fat and it was amazing -- succulent, tender, richly satisfying. There seem to be two schools of carnitas preparation: one advocates serving the meat in discrete briquet-like chunks with a crusty fried shell (I had this variety at Mexico DF last weekend) and the other goes for shredded, soft meat with crispy and fatty bits all mixed up together. McLagan's carnitas fall into the latter category which made me happy because it is the better way.
Her recipe is simple: marinate pork for two days in orange juice, cook slowly for a long time, then evaporate out the liquid and fry. I served this incredible meat with tortillas, avocado, and McLagan's refried beans which were good, though I did think 2/3 cup of lard was excessive for a half pound of dried beans. I'd rather spend calories on carnitas.
Dessert was brown butter ice cream which had a lovely nutty flavor, but was -- surprise -- kind of rich and left a film on the spoon. Owen, however, was undeterred and ate two giant bowls. He also had it for breakfast today because he was late and it was a bad morning and I figured: eggs, dairy and sugar are just pancakes in another form, minus the work and flour. 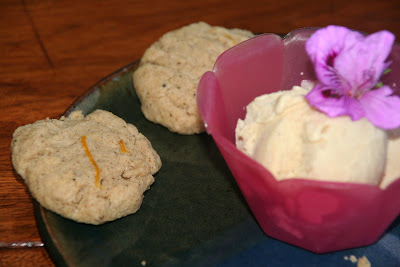