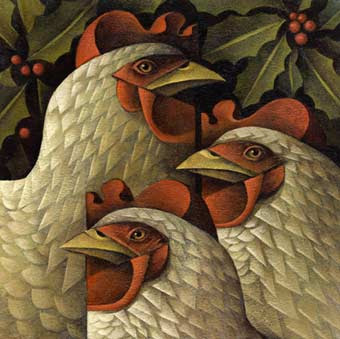 Today Owen's friend and his father, J, were granted an audience with the new chicks who currently reside in a little cage in the room formerly known as my office. J's face took on this wry expression, half amused, half disgusted. He said, "I'm frankly not much of a chicken guy. I bet your neighbors are going to have some feelings about this."
Well, I bet they are. Like I hadn't thought about this?
I said, "I called the county office and you're allowed to have up to twelve chickens on a lot of this size."
He said, "Did you ask any of your neighbors what they thought?"
"No," I replied. "They don't ask me how I feel about their dogs."
I should have brought up leaf blowers. Dogs don't bother me but I absolutely HATE the leaf blowers.
I did actually consider asking our neighbors if they'd mind if we got chickens. But someone might have said, "Yes, we mind." Then I would have had to say, "Hmm. That's really too bad, because we're getting them anyway."
Better not to ask. Am I wrong?
Posted by tipsybaker at 4/19/2009 06:04:00 PM