Our flock is complete 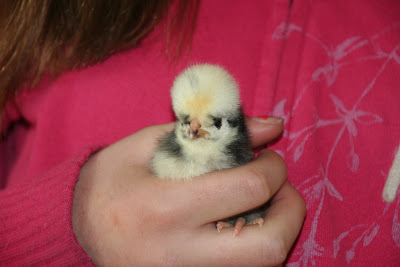 I feel like the Mia Farrow of chicks. Fortunately, I'm required by county code to stop or I probably wouldn't. It's not so much that they're cute -- the ones we got a week ago have already ceased to be cute; they're almost reptilian -- but they bring out the collecting instinct, which can be a problem. See subtitle of blog.
I'd been planning to get two more chicks to fill out of the boring all-Buff Orpington flock, and had learned that a feed store "near" my grandmother's house had Marans and Ameraucanas. So she and I made a pleasant 2-hour field trip yesterday afternoon. It turns out that the store had sold out of Marans, but had brought in all these other intriguing varieties, including white-crested black Polishes (above), silver crested Polishes, and Barred Rocks. The Polishes are spectacularly strange looking when they grow up and I decided to get two even though (maybe because) I'd read they are often bullied on account of the dopy top knots that make it hard for them to see. Poor girls! We left the store with five new chicks. Mark was not delighted.
Watching the new babies integrate with the older chicks you can see that "pecking order" is no empty cliche. It does not appear to be strictly a matter of age and size. The tiny Ameraucana is pushing all the big Buff Orpingtons around; she rushes right at them and they step nervously aside. The Barred Rock (below), on the other hand, seems to be extremely timid. 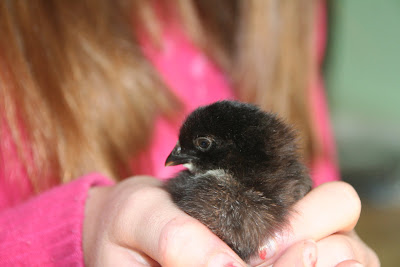