Milk: There's a lesson in this 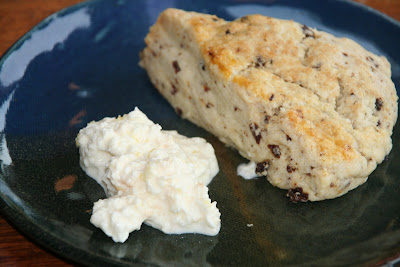 The scones were great, the clotted cream disgusting. It's all my fault because I got greedy.
I followed Anne Mendelson's recipe to the painstaking letter until the crucial last step. To make clotted cream, first you mix together cream and milk and let it sit for a day in a cool room. Then you heat it very slowly on the lowest possible flame of your stove. The cream gradually forms a beautiful, wrinkled, golden crust atop the milk and after four hours, during which time it must not boil, you put the whole pot in the refrigerator for at least eight more hours.
This morning, I carefully lifted off the crust, which is the clotted cream. It was lovely and buttery and smooth. I put it in a bowl. Then I noticed the milk below was filled with lumps. More cream! I carefully scooped those into the bowl on top of the cream. I actually thought: Anne Mendelson might have MENTIONED in her recipe that the milk is filled with lumps of cream. Silly lady.
I should have known better, because as far as I can tell, Mendelson is perfect. Finally, I tasted one of the clumps and it was flabby and grainy, like faintly sour, curdled milk. But by this time it had contaminated all the cream, which I could not retrieve, or even find, when I poked around in the bowl. I tried to eat it anyway, but ugh.
Posted by tipsybaker at 4/07/2009 07:54:00 AM