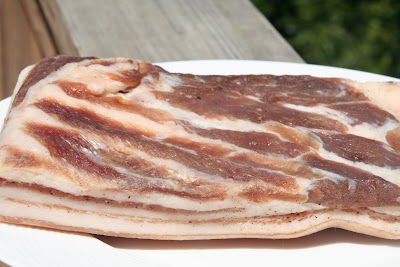 Did you know anyone who ate salt pork in the USA in the 1970s? I didn't, but it seemed to sustain the characters in all the old-fashioned books I so ardently loved. For protein, people ate hunks of salt pork. For dessert: fried pies or blancmange. What were some of those other enticing long-ago foods? Drawing a blank, but I'm sure if I pulled out On the Banks of Plum Creek or Anne's House of Dreams they would all come rushing back.
As an adult I was thrilled to one day stumble across Hormel salt pork in a little-used area of the supermarket, then crestfallen to discover that it tasted like nothing more than really salty pork. What a surprise. Bacon is much better.
Still, I couldn't resist the recipe for homemade salt pork from Jennifer McLagan's Fat. It's simple: You rub a piece of pork belly with salt and crushed spices then let it cure for a few days. Rinse, wrap in cheesecloth and pack in the covered wagon when you light out for the territories.
I used this salt pork to make McLagan's baked beans. She has a funny little introduction to the recipe in which she reminisces about how her mother used to serve canned baked beans on toast for breakfast, along with some cereal. "The memory of those breakfasts is probably why I don't often eat breakfast today," writes McLagan. See how much baggage two different people can bring to a pot of beans? 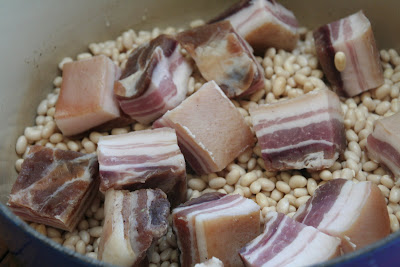 These were very good beans, sweetened with brown sugar and molasses and sharpened with mustard. 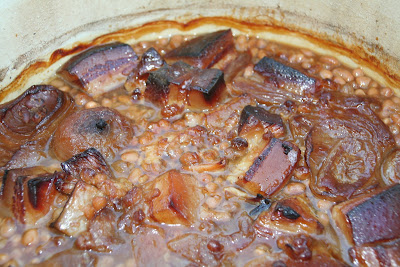 But my favorite recipe remains the Vermont apple baked beans -- made with maple syrup, a fresh apple, and country-style ribs -- from Philip Schulz's As American as Apple Pie. I've baked a lot of beans over the years and Schulz's have proved impossible to beat.
Anyway, I'm over salt pork. Salting may have been a useful way to preserve meat on the frontier, but we now have refrigerators. I still wonder about fried pies and blancmange.
Posted by tipsybaker at 4/20/2009 07:39:00 AM