All about chickens and egg whites 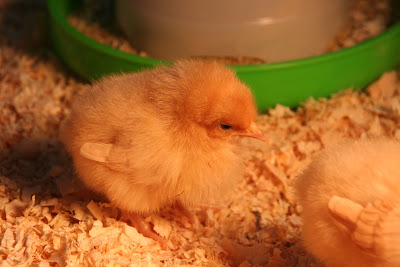 We got chicks. Six Buff Orpingtons, the only chicks available in the greater Bay Area. I know because I called everywhere and chicks are apparently very trendy these days, probly for the "free eggs." As with vegetable gardens, I think it's going to turn out to be more expensive to raise hens just based on yesterday's starter costs: $55 for feed, dishes, sawdust, chicks, lightbulb and clasp lamp to keep them warm and alive through the night.
They're very fun to watch scamper around, pecking and scratching and cheeping. Isabel and Owen are ecstatic. Mark: not ecstatic, but putting on a game face, which I appreciate.
Despite distractions, I cooked dinner, made a lovely "Maltaise sauce" flavored with the juice and zest of a blood orange. Recipe out of Jennifer McLagan's Fat. Served it with asparagus and salmon, but sadly no one in my ascetic family is keen on buttery sauces except me.
Isabel also baked this unintentionally marbled mocha angel food cake that was, contrary to my expectations, delicious. 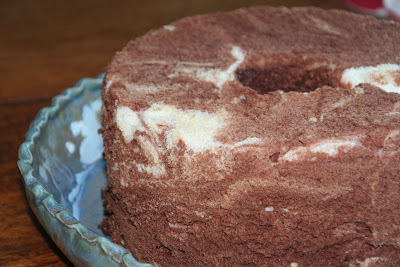 We used egg whites that had been stored in a jar -- an uncovered jar -- in the refrigerator for two months. I hesitated to type that because, yuck. But why write if you don't write the truth? You don't really have to throw out egg whites until they grow a layer of mold.
Posted by tipsybaker at 4/17/2009 08:33:00 PM