Platter of Figs: Going back into the bat cave 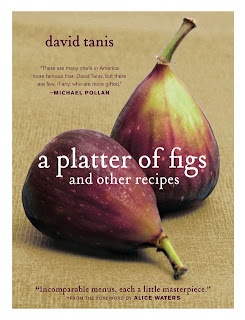 I'm a sucker for cookbook recommendations, and this list would be more tempting and problematic but for the appearance of Platter of Figs, which makes me inclined to dismiss all of her other tips.
A few months ago, I cooked every dish in the "winter" section of Platter of Figs except the persimmon pudding. Expectations were high for this elegant, much-praised book. Results: stunningly mediocre. Only two dishes (celery root remoulade, octopus salad) would I go out of my way to make again, and the food that didn't work out was not just meh, it was, in some cases, curiously hateful.
One of my darker theories is that David Tanis feels contempt for his bourgeois American audience and this book is his passive-aggressive way of delivering the message. Exhibit A: The menu featuring pig's ear salad and chilled prunes, which was even more revolting than it sounds.
On the other hand, it's both foolish and wrong to assume evil motives without powerful evidence, which I don't have. You can't cook at Chez Panisse for 20+ years without being a brilliant chef. Tanis may be a lovely man and culinary genius who simply wrote a lame cookbook.
Also, to be fair, maybe winter isn't Tanis' season. I'm forcing myself to execute two spring menus before I can finish with this book. But which ones? These menus are punishingly expensive, strangely untempting, or both. I could mix and match dishes, but the whole volume is built around purportedly "harmonious" menus. As Alice Waters puts it, "each a little masterpiece."
Bah.
Can't afford the lobster risotto. Ditto the veal with morels. I could do the "five spice duck with buttered turnips and fried ginger" except the starter calls for two pounds of fresh crab. Even one pound is too spendy. A side of wild salmon is out of the question. (I agree with Tanis that there are compelling environmental reasons not to buy farmed salmon, but then he makes one of those statements that drive me beserk: "Farmed salmon are as bland and flavorless as factory chicken." This, alas, is not true. The farmed salmon from Safeway is repellent, but I find the Atlantic farmed salmon from Whole Foods delicious, neither "bland" nor "flavorless," words that, incidentally, mean exactly the same thing. Food that is bad for the world does not always taste bad, though it would be convenient if it did; there should be a name for this fallacy.)
Anyway, this leaves me with the following two menus:
How to Cook a Rabbit
-spinach cake with herb salad
-mustard rabbit in the oven
-parsnips Epiphany-style
-apple tart
Can't get revved up for parsnips, unsure about spinach cake. But I'm okay with bunny; I'll just tell the kids it's chicken. No, no more fibbing. I'll tell them the truth, just won't expect them to eat it.
Supper of the Lamb
-warm asparagus vinaigrette
-shoulder of spring lamb with flageolet beans and olive relish
-rum baba with cardamom
This actually sounds amazing.
If these menus turn out beautifully, maybe I'll try one of the splurge menus. If they are innocuous or worse, I'm officially done with Platter of Figs.
I'm still not done with Wizenberg. I love A Homemade Life, especially after the funny dinner we cooked last night, which gets its own post. I got up too late to make the Dutch baby pancakes and I also want to make her custard-filled cornbread.
After that: back to Tanis, however briefly.
Posted by tipsybaker at 5/07/2009 07:26:00 AM

Labels: a homemade life, Platter of Figs
Email ThisBlogThis!Share to TwitterShare to FacebookShare to Pinterest