Kombucha: You know what bugs me? 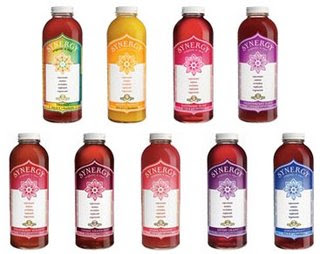 The snake-oily Synergy Kombucha label.
Here's my (least) favorite bit: "G.T.* Dave began bottling Kombucha in 1995 after his mother's success from drinking it during her battle with breast cancer."
First thought: wow, bad writing. Country really is going down the tubes. A split second later, duh, not bad, shrewd. The label doesn't say, "kombucha cured mom's breast cancer," because there are probably rules about that. She had success from drinking it.  The web site promises to provide more details, but so far doesn't.
Deb and I had success from making our own kombucha yesterday, so I can enjoy this refreshing probiotic beverage without having to read irritating marketing claims.
*Gin & Tonic? A half-hearted internet search didn't reveal what "G.T." stands for, but did turn up this fawning profile in which the author describes him as "gym toned and sleek as an otter." I think he looks like Alex on Grey's Anatomy. Maybe G.T. stands for "gym toned."
Posted by tipsybaker at 5/24/2009 08:32:00 AM

Labels: kombucha
Email ThisBlogThis!Share to TwitterShare to FacebookShare to Pinterest