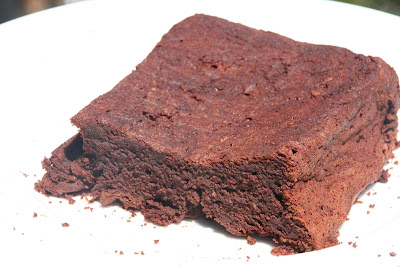 I tasted a single crumb of David Lebovitz's chocolate cake the other night and thought, I'd rather just eat the whipped cream plain. Meanwhile, my family was hacking at the cake like a bunch of starved trolls.
They said it was stupendous. No reason to doubt them.
I want to love chocolate. I keep trying. Trying works with everything else. I hated Breaking Bad until episode five, but now have a rich appreciation for a thoroughly sick TV show. I worked on my coffee aversion and was able to become addicted by age 19. My innate detestation of alcohol, another rousing success story!
Why not chocolate?
To be continued.
In other news:
-For years I've idly suggested to my father that we go to Vietnam together and he said no. A few weeks ago I idly suggested to my father that we go to Vietnam together and he said yes. July. Booked the tickets yesterday. This is almost unbelievable.
-I'm starting to hate our insane Ameraucana chicken who (I imagine) infects all the other docile little birds with Big Ideas. She's striped with wild, malevolent eyes and weird chalky greenish legs and would rather dive beak first into a snake-infested blackberry bramble than be carried lovingly by Isabel to the hen house. Owen named her Arlene after the pink cat in Garfield. I call her by other, unprintable names.
-I'm making  the spicy potatoes from the January '09 issue of Cricket as requested by Owen. Recipe calls for a staggering quantity of paprika, cayenne, and chili powder (YES! All three) given that this is a kiddie magazine. I'm hoping Owen will feel some obligation to eat them, but doubt it.
Posted by tipsybaker at 5/28/2009 08:08:00 PM