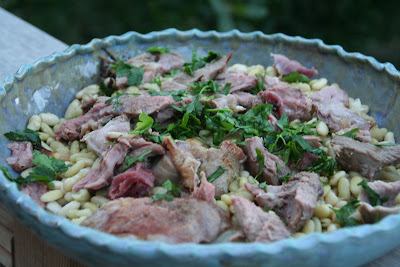 Sometime during the winter, I decided to review David Tanis' Platter of Figs, but since his book is based on seasonal menus I stopped when I'd executed all the winter menus. I had some problems with the book, but decided to hold off before issuing a final judgement until I'd cooked at least one menu from  another season.
Which brings us to last night and Tanis' so-called Supper of the Lamb:
-Warm asparagus vinaigrette
-Shoulder of spring lamb with flageolet beans and olive relish
-Rum baba with cardamom
First, a shopping challenge. I could not find "shoulder of spring lamb" in any local market, so I bought the tiniest leg of lamb I've ever seen. I don't remember the weight, but it cost $9.90 at Whole Foods. If you buy much meat, you know that is one petite leg. I roasted it, sliced it up, and served it on a bed of flageolet beans.
Now, a shopping question. What is the deal with flageolet beans? One pound cost almost $7 at Mill Valley Market. Are flageolets that much better than Great Northern White beans that they merit paying three times as much? I know, I know, they're incomparable, pale-green, delicate, French, etc. etc. but the price galls me.
And yet another shopping issue. Asparagus. Here's Tanis on asparagus: "Ask any cook who has worked with me -- they'll tell you I'm a fanatic about asparagus. I've driven kitchen apprentices half crazy making them go through entire cases to choose only the the most perfect spears. I adore asparagus but it must be freshly picked or I'm not interested."
He goes on for two more paragraphs. I appreciate the information. I will feel very privileged when/if my asparagus seedlings mature next spring and I, too, can savor "only the most perfect spears." Meanwhile, the asparagus at the supermarket comes in a bunch held together with a fat rubberband and it is not, I suspect, "ultrafresh." Tanis' preparation -- boil, dress with a very light vinaigrette -- did nothing to enhance this particular bunch. The way I usually cook asparagus is to roast it with a little olive oil in a very hot oven until it shrivels and turns dark brownish-green, a procedure that makes even tired, middle-aged asparagus delicious.
It's not fair of me to hold Tanis' ingredient fetishes against him. He has exacting standards for his ingredients, and this is important. We should all be a little pickier. It's just that the barriers to entry for some of these dishes are rather high for an ordinary American cook.
Unanimous verdict on the lamb, beans, and asparagus: fine, nothing special.
The rum babas, on the other hand, were divisive. These are eggy, yeasted cakes that you bake in a muffin tin and then drench with a sticky rum-flavored syrup. 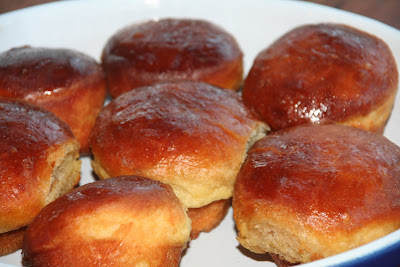 Husband: "Anything with rum in it, I don't like."
Isabel: "I'm not going to have one because I don't like things with rum in them."
Owen: "I would have tried one, but everyone said I wouldn't like it. "
Tipsy: "Sometimes it's depressing, cooking for this family."
This was a crazy good dessert. I have eight babas left and I don't know how I'm going to stop myself from eating them all for lunch. It occurred to me to feed them to the chickens, but I worry the rum would make small creatures drunk. I could swear that after I give them scraps of green tea cake they start squawking more and running around.
I have not forgotten about the green tea cake.
Posted by tipsybaker at 5/20/2009 07:43:00 AM