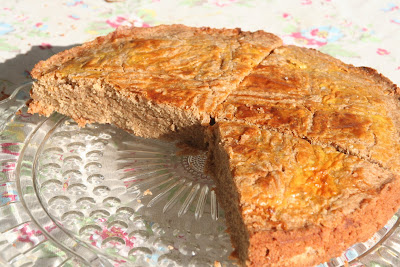 I keep falling behind on the cookbook reviewing, the ostensible reason for this whole blog.
Living the Sweet Life in Paris: so far excellent. I need to spend an afternoon reading David Lebovitz's memoir cover to cover, because I think it is meant to be read as much as cooked from. The bits I've read have been amusing and kind of raunchy, though it might be my imagination. I'll get back to you on that.
The recipes seem to be equally divided between twists on French standards (chocolate chip cream puffs) and sentimental favorites from back in the States (ribs) that Lebovitz cooks to show snotty Parisians what they're missing.
The other night I made his pork ribs, the sauce for which contains ketchup, much sneered at by the French. Maybe a little too much going on in that sauce. In addition to the ketchup: rum, molasses, soy, ginger, chili paste. The ribs couldn't quite decide if they were Asian or down home, but everyone enjoyed them, especially Owen, who likes anything on a bone.
We ate the ribs with Lebovitz's yummy, crunchy peanut slaw, which I made with red cabbage. I asked Husband what he thought of the cole slaw.
Husband: Not as good as cole slaw.
Tipsy: But it IS cole slaw.
Husband: No, coleslaw is white cabbage with mayonnaise.
Monday night for dinner we had Lebovitz's carnitas which were fabulous, albeit not quite as fabulous as Jennifer McLagan's carnitas on account of the cinnamon stick. Don't like cinnamon in carnitas. Still, shredded caramelized pork shoulder is shredded caramelized pork shoulder and it's hard to beat. I hope the French people to whom Lebovitz serves this are suitably awestruck. (His recipe is here; I tripled the cumin.)
Dessert: Breton buckwheat cake. Heidi Swanson featured this smashing recipe at 101 Cookbooks, and I agree with everything she says. As it turns out, we didn't have any buckwheat flour, but I did have a brand-new bag of teff* flour, so I used that instead, per Swanson's suggestion. If I could get away with writing things like "this cake made me swoon," I would. But I can't. I loved it a lot. Breton teff cake -- buttery, dense, redolent of cinnamon and rum**-- would be on my list of top twenty cakes, if I had one.
I asked Husband what he thought of the cake.
Husband: Not as good as cake.
Discussion ensued. Turns out my whole family believes that a cake, by definition, has frosting, even if it comes from a can.
I worry that I make my husband out to be a pill. I do. He is. But he does have a few good qualities. He shouts during sporting events even on TV, looks for my glasses when I lose them, hates the chickens (he calls them "the turkeys") but has cheerfully taken over the job of building their future nesting boxes. He buys people (including his mother-in-law) the most thoughtful presents and never buys anything for himself. Which is sad. He calls Isabel "Freckle-face Jones," has gracefully accepted that Owen will never be an athlete, and makes them both waffles when I would give them cold cereal. Like right this second. I completely trust him to do the right thing when it matters because he always has. He's also really funny. He just doesn't like to eat.

*Teff is a grain common in Ethiopia and often used to make injera, the sour, spongy flatbread you get at Ethiopian restaurants. I've been working my way through the flour and sweetener section at Whole Foods. Everyone needs a hobby.
**Husband also objected to the rum content of the cake. Though it only contains 2 tablespoons mixed into the batter, he could taste it. He told me I had to write this; he's proud of what he calls his "princess and the pea" palate. Personally, I do not count this among his good qualities.
Posted by tipsybaker at 5/26/2009 08:53:00 AM