Make it or buy it: kombucha, part 2 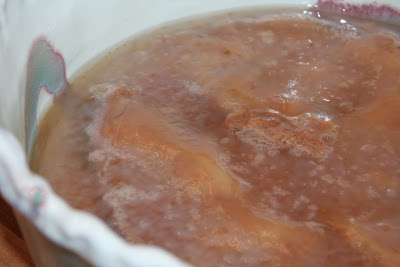 Yesterday, my friend Debra came over to finish making the kombucha we started a week ago Friday. We lifted the cloth covering the bowl. After eight days, there was a glaucous film floating atop clear, golden liquid.
Debra lifted the skin and it split into two layers. 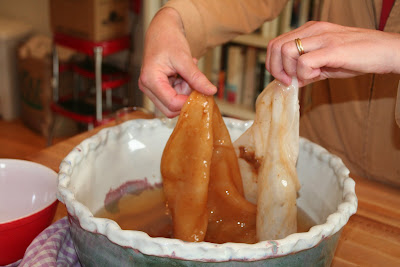 On the left is the meaty, brown original "mother." On the right, her thin, white daughter. Not pretty, but this is what was supposed to happen.
We put the two mothers aside and gazed at the copper-colored kombucha tea. I wish I could supply more drama at this juncture. Neither of us hesitated to sample the liquid, and it was delicious in the way that kombucha is delicious, which is to say, refreshing and tangy and sour. Ours tasted a little of apples. No one had to call 9-1-1. 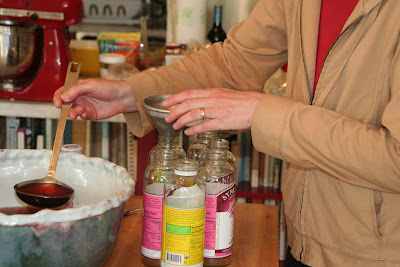 We doctored the kombucha with a tiny amount of ginger (grate ginger, squeeze in a cheesecloth) and some cherry juice. Might omit the cherry juice next time; ginger was all it needed.
Then we ladled it into Deb's empty Synergy bottles with annoying labels that I have to peel off asap. We didn't fill the bottles all the way to the top for worries that they might explode. 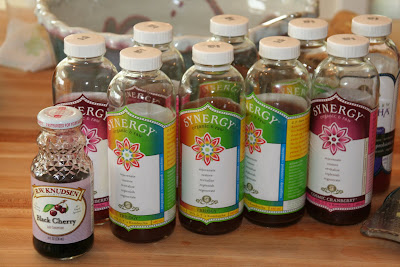 It was altogether satisfying and extremely cheap, if not a project for the squeamish. I'm working on a price breakdown.
I don't know what to make of the kombucha health claims. I don't know what to make of the kombucha horror stories. Both probably have some merit. But I doubt I'll ever drink so much kombucha that it starts harming my liver, because I don't believe kombucha will cure cancer, make me skinny, prevent arthritis, or give me beautiful hair.
That said, it really does taste like a tonic. I've had a punk week and yesterday told everyone I was taking the night off from cooking. I made a giant bowl of buttered popcorn and ate it all by myself, stretched out on the bed with some light reading material. It was selfish and it was restorative, except that after consuming a giant bowl of buttered popcorn you feel greasy and sick. So I drank a glass of fizzy kombucha. It was like adding some vinegar to an overly oily salad. All better.
Posted by tipsybaker at 5/24/2009 10:29:00 AM

Labels: kombucha
Email ThisBlogThis!Share to TwitterShare to FacebookShare to Pinterest