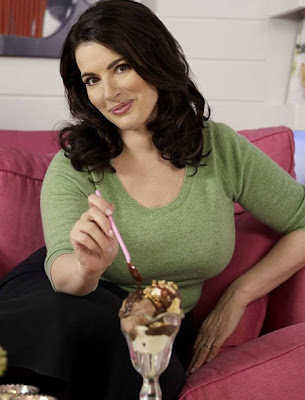 She's smart and impertinent and saucy and funny and her recipes are wonderful. Her pistachio macaroons will change, possibly ruin, your life. There is so much to admire and love about Nigella Lawson but her books are dangerous. Sisters, you know what I'm talking about. The woman is unbelievably gorgeous and fleshy and you see a photo of her licking the cake batter off a beater and the temptation to delude yourself becomes almost overwhelming. Enough with this weight watching nonsense! I'm going to let myself get bountiful and bosomy and beautiful just like Nigella!
Wouldn't that be lovely? I certainly think so.
Except, as we all know, the ways we ladies fatten are as many and varied as the colors of our skin. Some of us become husky, others stout, others adorably plump, others unadorably plump. There are those whose legs stay slim as their bellies balloon, and there are women who grow mountainous from the neck down but somehow retain the sculpted visages of Renaissance madonnas. And then there are the Tipsy Baker and her kin, who, fifteen pounds up, begin to resemble hearty Irish peasants, thick of ankle and calf, round-faced, fond of a pint.
Which is to say, not the type that someone like Charles Saatchi would ever marry.
Not that we'd ever want Charles Saatchi to marry us (though we don't actually know this for a fact) but I'm making a point here!
No, Saatchi and other discerning billionaire alpha males opt for the Nigellas, who only become more stunning, more bodacious, more lusciously upholstered with every forkful of spotted dick. Kate Winslet is another of this enviable breed, as is Mad Men's  Christina Hendricks. Sophia Loren, Marilyn Monroe.
But not Elizabeth Taylor. No, for Liz and the rest of us, sadly, less is usually more.
I attach no moral virtue to being slender. Our culture is crazy and boring and pathetic on the subject, and if you want to eat ten pounds of Nigella's sticky toffee pudding pancakes right this instant, bon appetit! But please understand that you're not going to look like Nigella when you're through. I have succumbed to this delusion myself, and it is my only warning about the otherwise divine works of the Domestic Goddess.

Now that's settled, let's move to the whole point of this staggeringly shallow post: Nigella's North American salad. What an efficient pantry cleaner! Plus, easy. In roughly four minutes the salad took care of leftover turkey, the remains of a box of wild rice, plus a handful of prunes which I substituted for the called-for dried cranberries. The tangy dressing was sweetened with leftover cranberry sauce, and there were some pecans for crunch.
Frugal and delicious.
Didn't eat too much of it, however, as I was mentally composing this post and found my appetite strangely diminished.
Posted by tipsybaker at 11/29/2008 10:07:00 AM

Labels: Must Go, Nigella Lawson
Email ThisBlogThis!Share to TwitterShare to FacebookShare to Pinterest