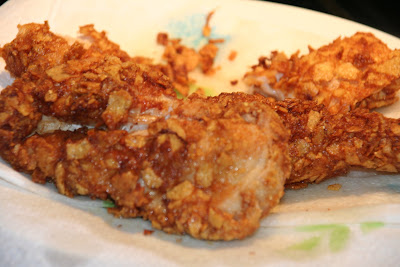 There are recipes in Kenny Shopsin's Eat Me that I'm convinced he only included to show off how contrarian and bohemian he is, how unconcerned with all our prissy, bourgeois rules of diet and tastefulness. Go for it, Kenny! I'm never going to make your chicken-fried hamburger, but I admire the spirit.
That said, last night I cooked something only marginally less horrifying: Shopsin's taco fried chicken, which sounded like an exotic twist on chicken fingers, the favorite food of my younger child.
Here's how you make taco fried chicken: Take chicken breast fillets, dip them in a mixture of heavy cream and eggs. Roll them in crushed tortilla chips then deep fry in peanut oil. Serve with a sauce made of equal parts Tabasco and melted butter. 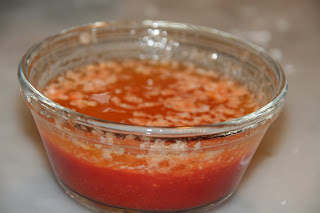 Got that? Poultry dipped in dairy fat, coated in crispy fat, fried in liquid fat, doused in spicy fat.
Quite tasty, but I hold crass junk food to a higher standard of deliciousness than I do steamed broccoli. I have tried calculating the calories in taco fried chicken and am stumped by how to account for the oil absorbed in frying. Supposedly it is less than one might think, but who knows. So I'm going with the intuition of one who has been dieting since Herman Tarnower recommended dry toast and lamb chops. My guess: A serving of taco-fried chicken is roughly equivalent to one-and-a-half amusement park corn dogs.
Corn dogs are better.
Posted by tipsybaker at 11/17/2008 07:21:00 AM