Eat Me: The Earnest Summation 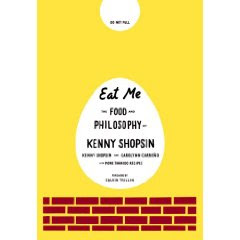 Entertaining, it certainly is. Also, cantankerous, funny, smart, and original. The "forget-all-rules" approach to cooking is right-on, and the brazenly ugly photography a relief in a world of gauzy food porn. I highly recommend Kenny Shopsin's Eat Me.
But when you spend hours and hours cooking from a book, you make some interesting discoveries. In the last couple of weeks I've found that I'm actively hostile to Shopsin, a dynamic that has made it hard for me to fully embrace either his food or his odd, brilliant book.
What went wrong between Shopsin and me? I offer two theories that probably say as much about me as they do about him.
1. Kenny Shopsin is skeevy. I'm not solidly behind this hypothesis, just throwing it out there as a possible subconscious influence. I don't really enjoy hearing about anyone's sex life, and Shopsin, who could play the father of a fat kid in a Judd Apatow movie, is no exception. Do I want to imagine him masturbating? God no, but he makes allusions. Do I want to think about his orgasms? No, but again. And then there's the raw sausage picture. If you have the book, you know what I'm talking about. Keep it out of my kitchen, dude!
I thought the off-color stuff was thoroughly amusing when I first read Eat Me some months ago. But, as I've said, you develop a deeper relationship when you're cooking from a book night after night, and though I never consciously recoiled, I'm not sure I'm down with the looking-up-skirts remarks.
2. Kenny Shopsin is a jerk. While I admire candor and eccentricity, you can be candid and eccentric without being uncivil. And yes, I think it is uncivil to kick people out of your restaurant because you don't like the way they look. (Shopsin: "We can usually tell if someone is going to work out the minute he or she walks through the door -- or even sooner.") I have come to imagine Shopsin's diner as a grimy little fiefdom where he makes outlandish unwritten rules, yells at people who innocently break them, then smugly boasts about it.
I don't enjoy being humiliated and I don't enjoy watching others humiliated, whether or not they deserve it. Borat, for instance, made my skin crawl. Shopsin comes off as a small-time tyrant who relishes power and humiliation then tries to pretend it's all about values.
I could be completely wrong -- Shopsin might be a lovely guy -- but this is my impression based on the evidence I have to go on.
Alright, now the food.
I made 26 recipes out of Eat Me:
Worth the price of the book -- 2 (lemon ricotta pancakes, egg cream)
Great: 4
Good: 10
So-so: 6
Flat-out bad 4
Impressive tally, given how negative some of my writeups were. Clearly, it's about so much more than food. Fascinating experience.
Posted by tipsybaker at 11/26/2008 05:16:00 AM