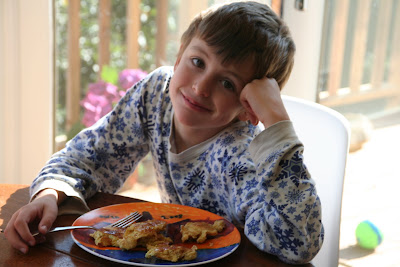 I know, I know, we're done with this whole dreary Shopsin's business already, but this one comes in under the wire. I almost forgot about all the Eat Me breakfasts I'd cooked. Nothing even borderline repulsive here, so carry on without fear. Sadly, we never got around to the mac n' cheese pancakes, though I have heard they are excellent.

1. Crepes. Or "crepes," as they're actually flour tortillas dipped in a mixture of egg, cream, and vanilla. Imagine tortilla french toast. Or maybe better not. Shopsin writes: "I have had several French customers tell me that mine are the best crepes they have had outside of France." I think those customers were just sucking up to the scary New York guy. You could easily convince people that these are real crepes, especially if you loaded them up with fillings, but served with just cinnamon sugar they have a distinct chewiness that brings to mind, I don't know, a flour tortilla.
2. Slutty cakes. Already written about these, though I was perhaps prematurely dismissive. Both Isabel and I found ourselves craving Shopsin's odd peanut butter/pumpkin hot cakes later that day.

3. Ho Cakes. Why "ho cakes?" Just general Shopsin-style smutty humor? I know it's a play on hoecakes, but why? To make ho cakes you cut up caramel candies and put one piece in the soft side of the pancake as it cooks along with some pine nuts. Flip and cook until done. Made as directed we found the caramel too isolated in the middle of each hot cake and in subsequent batches scattered tinier bits of candy throughout. Better! Still, not worth buying a bag of caramels just to make.
4. Lemon Ricotta Pancakes. Here's Kenny: "My editor, Peter Gethers, insisted on only one thing when he asked me to write this book: that I include the recipe for these pancakes." Thank-you Peter Gethers. A moment of silence for the lemon ricotta pancakes, which are airy, tangy, delicate, and great.
5. Bread Pudding french toast. See photo at top. Cool way to use up stale baguette. Cut it into chunks, macerate in eggs and cream (or less fattening dairy product of choice) then dump the whole mess into a skillet of butter and fry until golden. Delicious.
6. Pumpkin pancakes. Bright orange batter that smells just like pie and is sitting in a bowl on the counter waiting for everyone else in my house to get up. 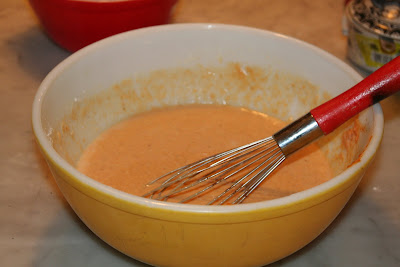