Eat Me: Without Chili Powder is it Chili? 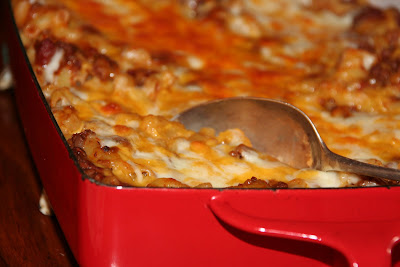 Man, that's a beautiful picture. How does she do it.
Melvil Dewey and I both recently made Kenny Shopsin's Chili Mac. Here's Melvil's report:
Shopsin's recipe for chili is one of the simplest I've ever seen. It's essentially chopped up beef with marinara and, interestingly, some coffee. But I found it, cooked as written, a little bland and overly dominated by the marinara. The recipe notably omits chili powder which I would have thought was as fundamental to the dish as meat is to meatballs (The Joy of Cooking's recipe for chili con carne, for example, is about the same size as Shopsin's and calls for a half cup of chili powder.) Shopsin admits in the headnote, "My chili changes from day to day." I took this as license to add a couple tablespoons of chili powder, as well as some of Shopsin's GA Barbecue Sauce, and the result was much more pleasing. One of my children really wished he could have his chili straight up, without the macaroni, but the other two seemed to enjoy the combination, as did I. I served it with shredded cheddar cheese, avocado slices in lime juice, cilantro, chopped sweet onions, and sour cream as optional additions. Really yummy, and a dish that will be making a return appearance in the Dewey family meal rotation.
Like Melvil, I was shocked by the lack of chili powder. But unlike Melvil, I LOVED the chili exactly the way it was -- sweet, rich, orange, a little oily. Much like the zero-alarm chili my grandmother made. Not sure what the coffee added, though it's fun to imagine it supplied a certain je ne sais quoi.
Melvil, did you make Shopsin's marinara recipe, or use something from a jar? I made his marinara, added the full 2 tablespoons of sugar, and though Marcella would have a stroke, thought it was swell. Why does everything have to be austere and authentic?
"Traditionally, Chili Mac is made without cheese because it is a poor man's dish. . . " Shopsin writes. Screw that. I covered the casserole with shredded cheese, baked until bubbly. Served with salad.
Verdicts, condensed:
Isabel, picking off cheese: "It's not that flavorful."
Mark: "Elementary school cafeteria food. Mediocre."
Tipsy: Silence. Intently eating.
Owen: Silence. Intently eating.
I asked Owen this morning if Chili Mac is now his favorite dinner. He hesitated, then said no, he prefers steak.
The boy's going to have a shock when we really do start topping everything with breadcrumbs.
Posted by tipsybaker at 11/19/2008 07:25:00 AM