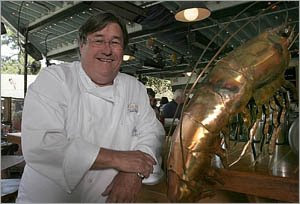 I don't know Louis Osteen. I've never eaten at one of his restaurants (though I've tried), and given that the last one standing (Louis's Las Vegas) just closed, I may never do so.
But I really like the guy. Just look at him. If you walked into a restaurant and saw him behind the stove wouldn't you grab a seat? The man clearly loves food, a gusto that comes through in some of the nostalgic headnotes to his recipes.
That said, he's not a great cookbook writer. Charleston Cuisine feels contrived, like an agent or editor spotted an amiable semi-celebrity chef and decided to cash in on the Low Country mystique.
Or maybe Louis looked in the mirror one morning and said, hey, Mario and Wolfgang and Charlie and Alice all have cookbooks, why shouldn't I?
Well, I can tell you why, Louis: Because you're a smiley, intuitive chef, not a miserable ink-stained wretch. And you didn't hire one to ghost your book. Mistake! We do have our uses.
I've pointed out some of the volume's shortcomings in earlier posts, and there were others I didn't record. There were peanut-molasses cookies that would have been infinitely better (maybe even too delicious) if the recipe had called for a teaspoon of salt. There was a bean soup that lacked any kind of zest. And there were ridiculously calibrated portion estimates that left you with either far too little, or far too much.
To be a brilliant cookbook writer you have to be slightly compulsive. You have to care about every detail of every recipe. You have to care about translating the ephemeral experience of cooking and eating into a permanent, precise, and possibly even poetic, document.
Which Charleston Cuisine is not.
I made 29 recipes from Charleston Cuisine:
Worth the Price of the Book: 0
Great: 5
Good: 17
So-So: 7
Flat-out bad: 0
Not a disastrous tally, but not distinguished, either. Keep in mind that it's not that difficult for a recipe to be "good," and that of those 17 "good" recipes there's not a single one that I feel compelled to make again.
But I devoutly hope Louis opens a new restaurant one day, and that I can go eat there.
Posted by tipsybaker at 11/06/2008 11:53:00 AM