Eat Me: Wrapping up 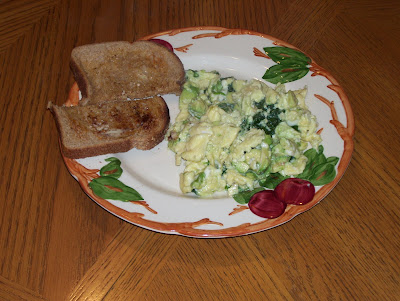 But before the final write-up, here's a different perspective from Melvil Dewey, who has had happier experiences cooking with Kenny. His triumphs include the so-called Auntie Scramble (photo above by Joseph T. Smoyer) as well as:

I've always felt that French toast (or Freedom Toast, as I will continue to call it until January 20 out of deference to our commander-in-chief) is one of the things you can always safely order in a restaurant, no matter how bad the place may be. It's hard to ruin it, and even the worst version of it is pretty good. That said, Kenny Shopsin's version is superb. I was feeling guilty about tweaking his chili mac, so on this recipe I followed his instructions to the letter--even using a pizza cutter to halve the slices.

Well, almost to the letter: I couldn't find Fox's vanilla syrup in the grocery store, so I substituted Torani syrup. Shopsin's version of French toast varies from others I've made in that it doesn't include any cinnamon, and the ratio of eggs to milk (or cream) is much higher in Shopsin's. I've been using Mark Bittman's recipe for the past 10 years or so, and it calls for two eggs to one cup of milk; Shopsin calls for six eggs to a quarter-cup of cream. So, as you would guess, the "batter" for Shopsin's French toast is much, much thicker and more eggy. The two children who tried it loved it, and demanded (somewhat politely) that I make it again today. In fact, since we had a double sleepover last night, we ended up with five little kids eating breakfast, and ALL of them liked it. A miracle.

It has come to this: Kenny Shopsin is like a third person in the Dewey marriage these days, and all culinary sins are laid at his feet. For example: Today I made a quick macaroni and cheese from scratch for Michael's lunch. Having no crackers or bread crumbs, and feeling a bit more free-wheeling in the kitchen since reading Shopsin's cookbook, I instead crushed up some parmesan Goldfish crackers and put those on the dish. Michael was displeased and complained to his mother, who said, "Oh, it's because Daddy's obsessed with making Kenny Shopsin's recipes." I had to clear Shopsin of any involvement.

Tipsy Baker's review of Patsy's Cashew Chicken from Eat Me made me nervous, but I had already bought the ingredients. So I decided to make a half-recipe of Shopsin's and a half-recipe of Nancie McDermott's "Chicken with Cashews" from her Quick and Easy Chinese. Dueling cashew chickens. Everyone loved both, but in the voting Shopsin's was the top choice of three diners (me, Ms. Dewey, and Henry), while Joseph and Michael chose McDermott's. The salient differences between the two dishes: Shopsin's chicken is dredged in flour and gets only soy sauce, lemon juice, scallions, and chicken broth as additions; McDermott's dish includes celery, garlic, and ginger, as well as a sauce of sherry, soy sauce, sugar, and corn starch. I thought both were delicious, and Ms. Dewey exclaimed, "Let's have this for Thanksgiving!" But the ideal dish would combine the two: the flour coating from Shopsin with the sauce from McDermott, and maybe some additional sugar. I'm convinced that the secret ingredient in most of the Chinese dishes I like (as interpreted in the U.S.)--Kung Pao chicken, crispy beef, sesame noodles-- is an assload of sugar, and neither of these dishes has enough.