Kennedy: There may be maggots 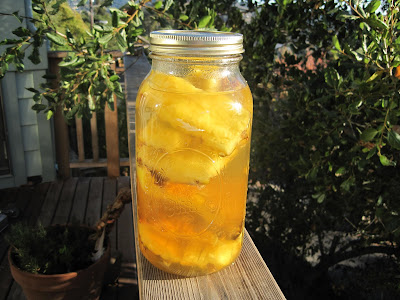 Author: Diana Kennedy
Book: From My Mexican Kitchen
Recipes: banana vinegar, pineapple vinegar
I've always wanted to make vinegar, but the recipes have made it look harder than I was up for, requiring trips to a winemaking shop, mothers, jugs, airlocks, crocks.
Diana Kennedy, however, offers several recipes for vinegar that involve no special materials. They also look like recipes written by an insane person, but I have now started both. 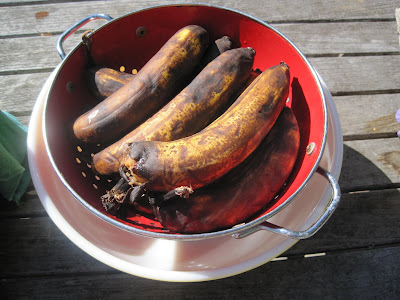 Banana vinegar. You slit the skins of overripe bananas, put them in a colander over a bowl, drape with cheesecloth, leave in a "very warm" place until the fruit emits all its juices. "Turn the mass over from time to time and gently press down to extract the liquid," Kennedy writes. "Lots of little flies will swarm around because of fermentation." Within several weeks there will be a cloudy fluid that you mix with crushed piloncillo (Mexican brown sugar) and continue to ferment. Kennedy insists it is delicious.
Pineapple vinegar. This involves placing the peelings of a pineapple in a jar with water and pounded piloncillo. Macerate. This seems more reasonable than the banana vinegar, until: "If things don't go according to order, small white maggots will float on the top (they may anyway.) Strain the liquid, and if it doesn't become acidic within a month, throw it away and start again."
Rick Bayless would never write recipes like these, and despite their obvious grotesqueness and the fact that I doubt they will work, I love these recipes. I hope they work. I can always bake banana bread, but a way to make use of pineapple peel is on a par with watermelon rind pickle.
Posted by tipsybaker at 9/10/2009 02:18:00 PM