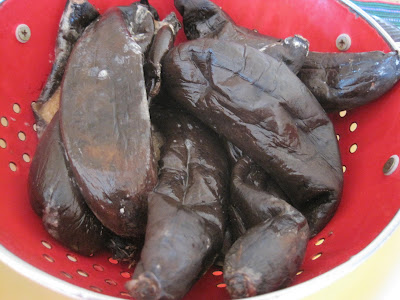 I will not let this photo linger long at the top of the blog.
You know how when you have some overripe tomatoes or peaches and fruit flies suddenly appear, then when you get rid of the offending produce they just as suddenly vanish?
It does not work like that with vinegar flies. The hideous, rotting, sea-slug bananas have exuded much charcoal-colored fluid that smells sour and seems to have a scummy vinegar mother floating on top. This is exciting. They have also attracted hordes of tiny flies. This is embarrassing.
We had company last night and took the banana vinegar-in-progress and its cloud of flies outdoors. But an hour later we were sitting there in the living room conversing and all I could see were the several dozen insects helicoptering over the coffee table. I felt like I was entertaining in a barnyard. All I could do was apologize and take a big swallow of wine.
Fortunately, they're tiny, feathery flies, not like the big, crunchy ones infesting Colin Beavan's apartment in No Impact Man. Owen and I saw this new documentary yesterday and it gave us something to talk about besides poultry. In case you missed the publicity blizzard, it's about a New York City family that decides to live sustainably for a year, which means no elevators, electricity, toilet paper, shopping, non-local food, etc. It's an excellent film for kids, as it forces them ponder how much they'd be willing to give up to save the planet. It's a riveting, irritating, inspiring movie for adults. Dana Stevens' funny and sharp review in Slate nails it.
Anyway, I am not giving up on the vinegar, since it seems to be working. I just think Diana Kennedy might have offered some more generous warnings about what to expect. She mentions the flies, but does not describe the extent of the problem. She's a withholder, that Mrs. Kennedy.
We are leaving for Morgan Hill, Owen and I, and when we return will have a frizzle chicken. I hope we do not also have rabbits, quail, and a pig.
Posted by tipsybaker at 9/20/2009 07:23:00 AM