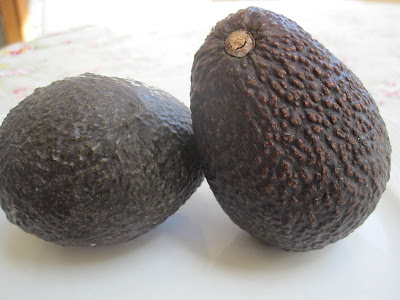 Author: Rick Bayless
Book: Rick Bayless's Mexican Kitchen
Recipes cooked: Tomatillo-green guacamole
Score: 10
I cooked so much for our Saturday night party that I'm going to break the report down into a few posts. Guacamole is a good place to start because that's how we started and because there's a tiny debate not-raging about whether tomatoes belong in guacamole.
I'd never given guacamole any much thought, but Rick Bayless's tomatillo-green guacamole was so superior to the usual that I had to pause for ten seconds to figure out what made it so. Without weeping chunks of tomato, this guacamole was suave, rich, handsome, entirely green. PERFECT. I'll let Rick Bayless describe it:  "This is my favorite twist on guacamole -- a little zippier than the tomato version, a little more unctuous because the tomatillos that replace the raw tomatoes are roasted."
I just opened one Diana Kennedy's books and see that she, too, has a tomatillo guacamole recipe. Mrs. Kennedy's headnote is as (characteristically) chilly as Bayless's is chipper: "I have eaten this guacamole on rare occasions at homes in the state of Mexico bordering on Morelos. Although it's not my favorite, it makes an interesting change from the more popular version and is particularly suitable when tomatoes are not at their best."
There are some other noteworthy guacamoles in the collected oeuvres of Kennedy and Bayless. On his web site, Bayless features recipes for mango guacamole and sun-dried tomato guacamole, neither of which . . . well, shouldn't knock 'em till I try 'em. Kennedy has a recipe for guacamole that contains pomegranate seeds, chopped peaches, and grapes. I'll make that one this week, while there are still peaches. My hopes are not high.
Posted by tipsybaker at 9/14/2009 07:00:00 AM