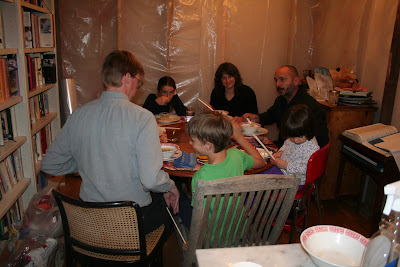 Maybe some of the tension of recent meals can be attributed to the way we have been dining for the last seven months: cramped, sealed in by cloudy plastic tarps, surrounded by teetering stacks of cookbooks, jars of coriander, dishrags, dictionary stands.

Last night was not without discord. Tolstoy and his wife used to complain about each other in their diaries, knowing the other would subsequently read those entries. They had a miserable marriage. I do not intend to use them as a model for Tipsy Baker, so I will never write anything sensitive here that I have not already settled with Mark. Like the following.

When he walked in last night, the scent of primer still heavy in the air from the construction, Mark found me in a flour-covered apron gabbing with my sister and sloshing a gallon jug of peanut oil around, all six burners blazing. A dark cloud passed over his face. "It's Tuesday, and you're trying to change the world," he said glumly.

I wasn't trying to change the world, I was trying to throw a festive banquet showcasing the cuisine of Cecilia Chiang! But I understand his point of view. I do. And then the kids got crazy, the smoke alarms started shrieking, we couldn't find enough chairs, and suddenly it all seemed like a very stupid endeavour.

But it turned out to be kind of lively and fun.

The meal started with bowls of winter melon 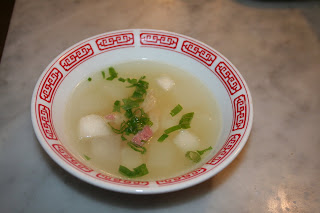 and ham soup, which was brothy and refreshing in the way of Chinese soups, although winter melon is an acquired taste. Not because of its flavor -- does it even have one? -- but because of its crispy, jicama-like texture, something Westerners don't expect in a soup.

Then we proceeded to Chiang's mother's Red Cooked Pork. "I've had dreams about this dish that have been so vivid that I thought I could actually smell the aroma of the meat," Chiang writes. "To this day, I think of my mother every time I cook this dish, and sometimes I think that's why I cook it so often."

I wish I had a picture of this pork. First of all, it isn't red, but a coffee brown, and after long braising in soy sauce and wine, the pork belly is powerfully flavorful, each bite including a thick layer of tender fat, a thinner layer of meat, and some silky skin. It was so unctuous I could only eat a few pieces and thought I didn't like it. But I woke up this morning craving Red cooked pork. 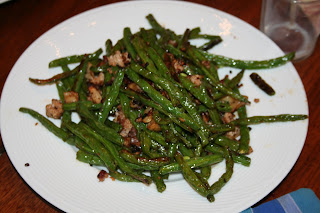 ring beans which called for a crunchy preserved vegetable I've never used before (but shall again!) called zha cai. It added a terrific tart kick to the dish. Lovely, too, were the sauteed mixed mushrooms, which included the phallic King oyster mushroom, another ingredient I have never previously used. I think my scallion pancakes could have been better, though we ate every bland, oily crumb. I'm not sure I understand how scallion pancakes are supposed to taste.

I was planning to send everyone off with glaceed fried bananas, but prudently decided to save that oil spattering project for tonight, the Cecilia Chiang finale, when Checka comes over and Mark will be working.
Posted by tipsybaker at 5/21/2008 06:41:00 AM