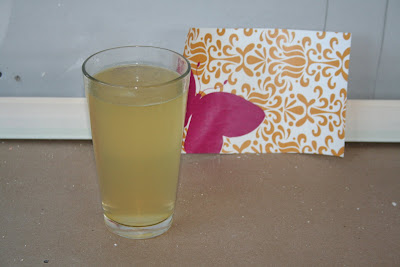 I remain bedeviled by the problem of food styling and photography. I've been visiting various celebrated food blogs and they all manage to include only gorgeous, luminous shots of their dishes while mine all look ridiculous. On the one hand, this blog is about writing in my own voice as opposed to the voice I use in other work. And so I don't want to get too hung up on stagecraft. On the other hand, I like pretty!

It helps when I move the food out of the kitchen, which currently receives no natural light and is wrapped in plastic and cluttered with pie plates and bags of poha that have nowhere to go until the construction project is done. Above is a glass of hot lemonade that I took into the construction site, which is flooded with natural light. I'm sure kids could make mean jokes about what the lemonade looks like, but we're past all that, no? I think the lighting, the coloring, the arty composition, all suggest I'm slowly starting to figure this out.

Actually, on closer scrutiny, that is yet another terrible photograph. Oh my God! It might be the worst yet.

Hot lemonade is my new Sidecar alternative. When I feel like a tangy drink at 6 p.m., this is what I will be imbibing for the next 87 nights. You make it by squeezing a lemon into a big glass, adding one tablespoon of maple syrup and hot water to fill. Refreshing, hydrating, not a Sidecar but not bad.

Onwards. I finished reading Cecilia Chiang's Seventh Daughter yesterday. Her story is so powerful that I wish it had been told in more detail. I am haunted by her account of going back to China in 1975 to visit her dying father, having last seen him in 1947 shortly before she fled the country. Once a dignified and wealthy man with countless servants and ya tous, he was now residing, Chiang writes, in a foul-smelling "windowless room, barely bigger than my walk-in closet at home. When my eyes adjusted to the darkness, I could make out a small hibachi on the dirt floor, a wash basin and a bamboo cot set against a newspaper-lined wall, upon which lay my withered father.

"Slowly he turned his head toward me and whispered, 'Number Seven daughter.'"

Hard to transition to food after that.

I made Chiang's Velvet Chicken last night, which is one of the strangest preparations I've tackled. You slice chicken breast very, very thinly, then marinate in egg white for an hour. After this, you heat a pot of peanut oil to 180 degrees -- not very hot -- and gently deep fry the chicken, which remains pearly white. Drain and quickly finish in another pan with just some cornstarch, sugar, sesame oil and wine. A little bland. I'm still deciding what I think. 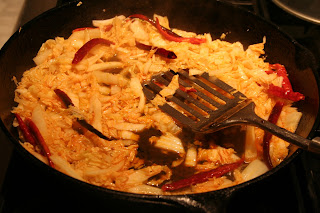 About the side dish, which was Hot-and-Sour Cabbage, I know exactly what I think: Heaven. One of those emphatically seasoned, unapologetically spicy/sweet/sour Sichuan dishes that makes me unbelievably happy.
Posted by tipsybaker at 5/14/2008 06:45:00 AM