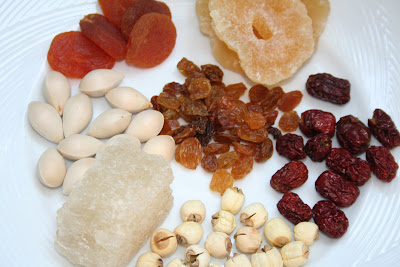 You could cut the tension with a Chinese cleaver as the Tipsy Baker geared up for the Cecilia Chiang finale dinner last night. Fans gathered from distant lands, like Palo Alto and Clay Street, to partake of an elegant array of delicacies from Madame Chiang's excellent cookbook, The Seventh Daughter.

Among the fine dishes served:

"You really do like to cook, don't you," said Dita (the Baker's grandmother).

"I don't like the skin on the chicken," remarked Owen (the Baker's son). 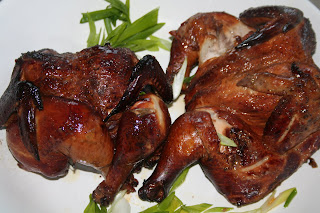 "It's game hen," replied the Baker.

"They have a sort of carbony taste, but I like that," said Checka. "Mother, we'll have game hen sandwiches tomorrow!"

"It's too spicy for me," said Checka.

"Look at this dragon," said Owen.

The Baker prepared two Chinese desserts. Many people think they do not like Chinese desserts, but they are misguided, according to the Baker. And they definitely have not tasted glaceed fried bananas, a specialty of the cook in Chiang's aristocratic childhood home in Beijing.

These were, according to the Baker, a little tricky to pull off. But the end result was dramatic and delicious. With the nimble assistance of Checka, the Baker deep fried the bananas, swirled them in hot caramel, then plunged them into a bowl of ice water so that the caramel instantly hardened into a shell. There were some slight glitches, but these were a huge hit. Delighted guests bit into crisp, cool caramel and encountered meltingly soft, warm bananas.

"These are divine!" said Checka. "I should stop eating. I'm getting so full!"

"I love these!" cried the humble Baker.

If she works out some of the kinks, the Baker said she thought these bananas might qualify her for a job as a private cook in Beijing. 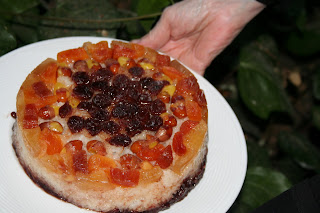 The last course was the Eight-Precious rice pudding. (See seven of the precious ingredients in the photograph at top; the eighth was canned red bean paste.)
This was a weird and colorful dish, sticky and complex, the gooey glutinous rice studded with slightly bitter gingko nuts, dried fruit, and starchy lotus seeds. Over the whole pudding, the Baker poured a sweet syrup made from Chinese rock sugar.

"I'm not really that hungry later on," said Dita politely, after a tentative bite.

"Did you know cave men were the second stage of prehistoric life?" said Owen.

"I hope this has restored your faith in family dinners," said Checka. 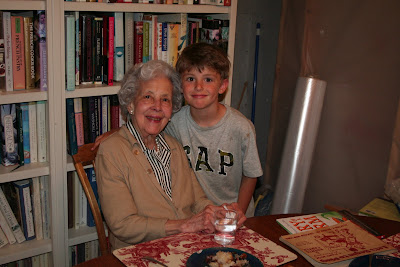