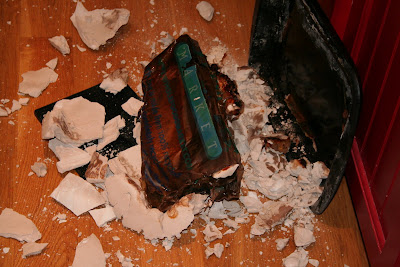 So I dropped the Beggar's Chicken. So we didn't get to ceremoniously crack the clay crust with a hammer at the table. So I ended up with a greasy clay slurry all over my kitchen floor. Big deal. I'm over it.

The chicken itself was luscious. Stella liked it. Or did we just tell her to pose like she did for a photo? 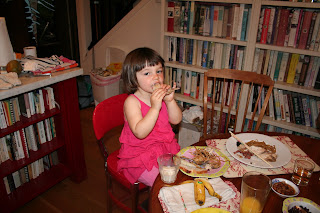 The stuffing -- full of Virginia ham and black mushrooms -- was terrific. Meat, moist and tender. Served Cecilia's garlic noodles as a side. Also a three-shreds salad (wimpy) and some salty star-anise peanuts.

For dessert: red bean cakes. "When I was a girl, vendors with steamers set over braziers on the back of their rickshaws used to ride through the alleys and streets of Beijing selling warm sweet bean cakes," Cecilia Chiang reminisces.

In the absence of vendors on rickshaws, you can make your own bean cakes according to Madame Chiang's recipe. Cook tiny Chinese beans, then soak them in a sugar syrup. Mix the syrup and beans with a pound of rice flour, pour into a buttered cake tin and steam over boiling water for an hour.

At this point the cake has the texture of an eraser and is the color of a bruise. You thinly slice, dip in sugar, and fry in peanut oil, which gives each piece a crisp, caramelized crust. In the photograph below, the bean cakes are the ragged things that look like burnt meat loaf. I wish I'd bothered to stage this shot with a little more panache because the cakes were, in fact, strangely addictive. But this was the end of a long, slightly tragic evening. 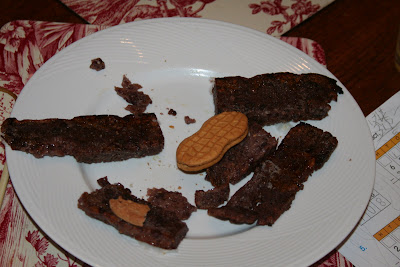