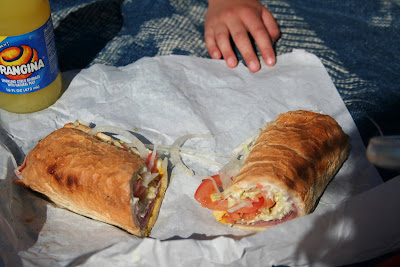 I'm taking a short break from Cecilia Chiang and Chinese cooking because my captive eaters are disappearing for the next few days. Plus, it's too hot to turn on the stove.

Yesterday, Owen and I shared a late afternoon picnic at Crissy Field. Intrepid chowhound Justine -- an ardent and discerning scholar of sandwiches -- has long recommended Marina Submarine, and so that's where we went for our overstuffed, oozing and altogether magnificent sub. It was prepared by an inscrutable Asian man who is something of a local celebrity for making ravishing sandwiches out of Subway-quality ingredients. The storefront where he works his wordless magic could not be dowdier.

Down at the beach, sand blew all over the sandwich, but we ate every mayonnaisey bite. Then for two hours Owen did not stop talking -- about whaling, beggars, volcanoes, curly hair (he's a fan), and how glimpses of the "sparkling" ocean make him "laugh inside." He is a young man of many theories. If there's anything sweeter on earth than a happy 7-year-old boy I don't know what it is.