The Seventh Daughter: The Truth about Family Dinners 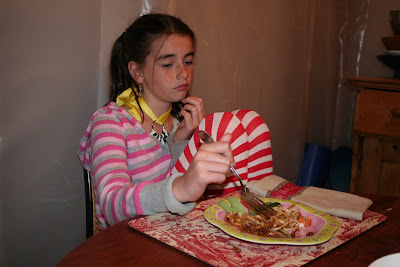 It was the best of times, it was the worst of times.
But mostly the worst. I'm talking about the hallowed institution of the American family dinner, which everyone from Mary Pipher to Alice Waters considers a cornerstone of our civilization. And here's the crazy thing: So do I, despite ample evidence to the contrary.

Last night was a doozie. At one point, I couldn't keep track of who was shouting at whom. Mark, understandably upset by a $400 traffic ticket, was uncharacteristically saturnine. Owen raced around trying to sneak cherries, climb on his father, and irritate Isabel, who approached her meal with the haughty disdain of a duchess who has just spotted a fly in her vichysoisse.

To lighten things up, I attempted to photograph dinner table reality for Tipsy Baker, to record the faces contorted in tears and fury; the children eating with their fingers and ducking under their chairs; the rolled eyes, the expressions of indignation, the atrocious table manners. Then Mark roared that if I continued teasing in this vein he would SHUT the blog down!!!

Let it be known that the photograph above was taken with the permission of the subject. 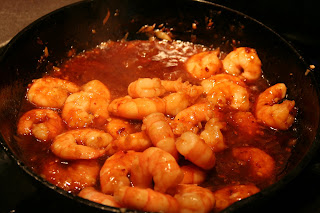 Now to the food. We're closing in on the last few nights of Cecilia Chiang's Seventh Daughter and I've been cooking like a banshee. I made some fine dishes for our hellish dinner, starting with Prawns a la Szechwan, which, according to Chiang, was a bestseller at her late, great San Francisco restaurant, the Mandarin. This garish red melange features shrimp napped in a syrupy, slightly acidic sauce full of ketchup. I've made a version of this before and though tasty, it's not one of my favorites.

On the side, I served noodles, specifically zha ziang mian, which Chiang describes as a cousin of spaghetti bolognese. Because I couldn't find a way to photograph my zha ziang mian attractively, you will have to imagine a glorious pile of snowy white noodles topped with a supremely zesty, chestnut-colored pork sauce. There was also some undistinguished but healthy baby bok choy with garlic and ginger.

For dessert, I attempted the sweet walnut soup, a painstaking delicacy made from pureed nuts, red dates, sugar, and cream. Chiang prepared the soup for her father shortly before he died, and recommends serving it in demitasse cups. The recipe requires that you boil and peel the walnuts, which resemble tiny crenellated brown brains and cling stubbornly to their translucent skins. "Make sure you really love the people you make this soup for," Chiang warns.

I do dearly love the people for whom I made this soup, however difficult it can be. Sadly, they didn't like the sludgy brown soup. And, to be honest, neither did I.