My Bombay Kitchen: The Catastrophe 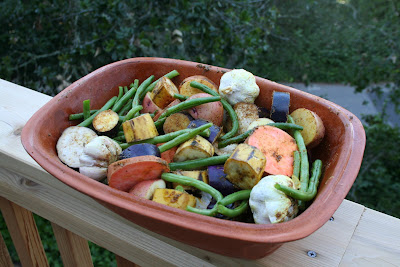 Do you see what is in that casserole? Do you notice the unpeeled heads of garlic? The unpeeled rounds of sweet potato? The unpeeled banana? All of it sprinkled generously with Dhana Jiru, Sambhar Masala and ground turmeric?

If your mouth is watering, there is something wrong with you.

This is Papri Claypot Stew (umbaryu) before it goes into the oven for an hour.

From a lifetime of slavish devotion to cookbooks, I have learned that one should always read a recipe carefully before beginning. This one I skimmed, and because it called for two spice mixes I made earlier this week, I decided it would be a good vehicle for using them up. Times are hard; I am frugal.

I am a freaking idiot.

Niloufer Ichaporia King specifies that this stew-- a Parsi version of a Hindu dish -- should be made with the papri, or hyacinth bean, which appears in farmers' markets towards the end of summer. It is early May, so I used string beans. It doesn't matter. I doubt that the "pungent and slightly bitter quality of papri" would have improved the final result. In fact, "pungent and slightly bitter" could only have made things worse.

How to describe. Limp, damp vegetables dusted with some vaguely harsh spice. Bananas that were impossible to distinguish from the eggplant, as both had charcoal-colored skins after baking. Dark gray, almost black, juices pooled in the bottom of the pot. It is too disspiriting to continue describing a dish that even I could not stomach.

Fortunately, I also made Firoza's khichri, another version of the great Indian legume and rice porridge. About Firoza's khichri, King is correct: "This is the ideal food. It makes happy people happier and comforts those who aren't."

It certainly comforted me. We also had a humble Cucumber-ginger salad, and for dessert, Khir (milk and rice pudding) which I somehow could not boil down to "the consistency of a thick pouring custard" even after an hour. Nonetheless, it was snowy white, sweet, and lovely.

Tonight: the last Parsi supper. I think the experience of Papri Claypot Stew will allow me to make this transition without too many tears.
Posted by tipsybaker at 5/02/2008 05:51:00 AM