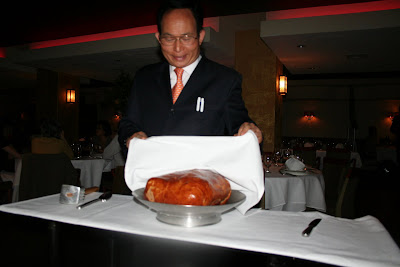 Last night, I bribed Owen with a copy of Ralph Masiello's Dragon Drawing Book, and we went to Shanghai 1930 which is, as far as I can tell, the only restaurant in San Francisco that currently serves Beggar's Chicken. (Cecilia Chiang helped write their menu.) Our garrulous waiter told us the history of the dish: A Chinese beggar had no cooking vessel, so he wrapped his bird in lotus leaves and pond mud, then buried it in a fire pit. When it came out, everyone thought it was the best chicken they'd ever eaten.

What kind of silly beggar shares his chicken? 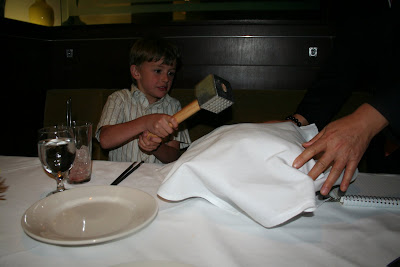 Owen cracked the crust which was made of bread dough because the health department will not allow Shanghai 1930 to use clay. Or so they say. 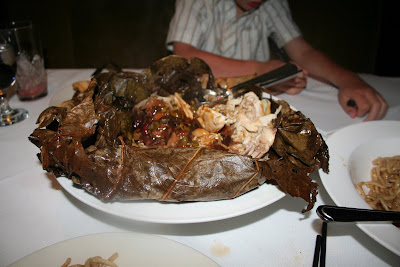 Then the chicken was deboned, doused in a sumptuous cocoa-brown sauce, and served to us in its lotus leaf wrapping. It looks like a mess, and Owen -- who had just downed a pint of Shirley Temple -- announced that it tasted strange, like tea, and immediately went back to drawing dragons.

Alas, I thought it was incredible. The stuffing was smoother than mine, and staggeringly rich and savory, including ginkgo nuts, ham, and plush Chinese dates. I made a disgraceful pig of myself.