The turkey has landed 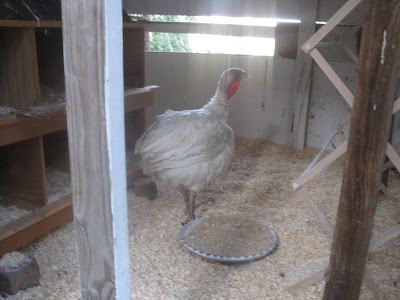 A few days ago I saw a Craiglist ad for a $10 tom turkey in Petaluma, which is about a half hour from where we live. I answered the ad, the guy was psyched, I was psyched, I told Owen and he was super-psyched.
This morning I called to arrange a time to collect the turkey, but the guy had changed his mind. He wanted to keep his turkey.
I was sort of relieved, my husband was super-relieved, and Owen was devastated. Because of Isabel's flu, he had to cancel all his social plans for the weekend. On top of that, NO TURKEY?
I went back on Craigslist, widened my search and located a $35 hen turkey out in French Camp, which is two hours from where we live. This was neither convenient nor a sweet deal, but Owen and I drove out there anyway and got this big white bird. She's not a heritage turkey or anything fancy; all I know about her is that she spent her youth pecking around in a yard filled with chickens, cats, junked cars, crushed soda cans, empty plastic bottles, discarded cereal boxes, and one pit bull mix. Hmm. Do you think they used organic feed? 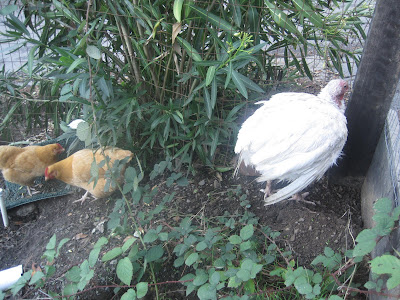 There she is, back at our house, standing in the corner staring glumly at the fencepost.
Ever since I read Animal, Vegetable, Miracle I knew a turkey was coming, and now she has come. It's a relief to have that done. We're not naming her. At least not today.
Posted by tipsybaker at 11/07/2009 04:27:00 PM