Finally, I understand the coffee yogurt and Ritz crackers 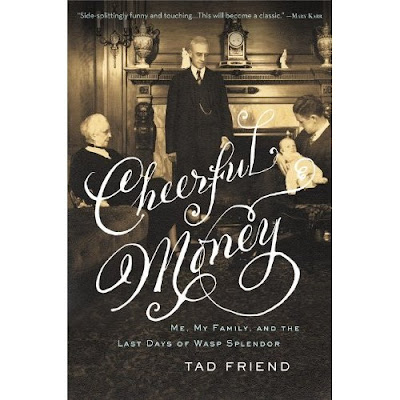 "The Wasp fridge is like the bachelor fridge, but Wasps load up on dairy, including both 1 and 2 percent milk, moldy cheese, expired yogurt, and separated sour cream. And atop the Wasp fridge sit Pepperidge Farm Milanos, Fig Newtons or Saltines. . . "
When I read that passage to my Wasp husband this morning he said: "That's bull. I'd never buy both 1 and 2 percent milk."
Which (I now understand) is such a Wasp response.
I didn't expect to love Cheerful Money by Tad Friend (Mr. Amanda Hesser), but I loved Cheerful Money. Could not concentrate on anything else until I'd finished it, which I did at 5 a.m. So many little mysteries about my spouse now solved! Such a funny, rueful memoir.
Here's an excellent passage about a generic old Wasp club:
"If you go to these clubs for dinner on a Saturday night, you get scotch-plaid-upholstered furniture in the Vintage Cherry or English Tavern finish; accordion-folded napkins in the water glasses and sourdough rolls on the bread plates; Dover sole and oysters Rockefeller served up by an Irish waitress with dyed auburn hair; and, for company, an elderly gent in the corner in a striped three-piece suit with pocket square who eats his meal and drinks his three Manhattans, sips Sanka with Equal on the advice of his doctor, then lumbers into the night. His demeanor forbids you to notice, let alone trespass upon, his immense loneliness. In his will the club will receive a small provision for a larger umbrella stand."
Posted by tipsybaker at 11/17/2009 06:39:00 AM