Another day, another coffee cake 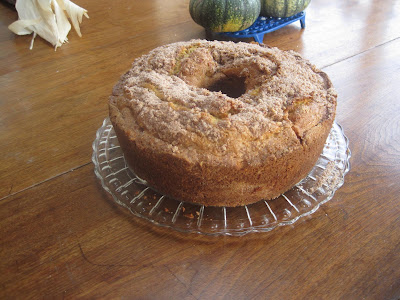 Funny, because I rarely eat coffee cake, preferring to maintain the illusion that I'm on a diet until at least noon. But in the interest of science. . .
The Gourmet Today buttermilk coffee cake beats out both Starbucks and the Todd Wilbur Starbucks clone recipe. Taller, fluffier, more substantial, prettier, though the same general rich batter/cinnamon streusel idea. All I would do to improve this cake would be to use more nuts and leave them in biggish pieces for crunch.
In other news, the turkey is tragically lonely. I would think she was sick if I hadn't seen her traipsing widely and seemingly cheerfully around her original home with her turkey companions just a few days ago. Now she just stands in one place for hours and makes hiccuping sounds if anyone approaches. I have picked her up, and she's this heavy, warm, throbbing armful of bird and I hate that she is so glum. She's barely eating, and although I've forced her beak into the water bowl, have not seen her drink. I'm sorry I didn't buy one of the other turkeys to keep her company, and have considered going back to correct my mistake, but it's a very, very long drive to French Camp and the plan was never to keep this bird for long.
If I get more turkeys, which I'd like to do in the spring, I'm going to get heritage turkeys, and start them from poults. This turkey is a painfully awkward animal -- she can't fly and can barely navigate the stairs because she's so top-heavy, so buxom. I suspect she's a broad-breasted white, the Frankenstein breed developed for factory farms. I'm sure you can have a very nice life as a clumsy, top-heavy, flightless bird -- but only if thoughtless people don't also separate you from your BFFs.
I really might have to go back and buy that other turkey. That is crazy, right? Yes. It is crazy.
Posted by tipsybaker at 11/10/2009 08:40:00 AM