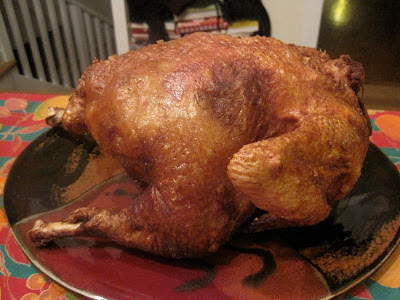 I hope everyone had a wonderful Thanksgiving. We certainly did. I'm truly grateful to have such a lovely family, both the one I was born into and the one I married into.
But this is a food blog, not a Hallmark card. Here's what we ate:
ajwain cashews
Parsi cheese crisps
avocado crostini
dried apricots with goat cheese and pistachios
maple sour cocktails (thank-you, Justine and Michael)
----
deep-fried turkeys
fresh cranberry relish
candied sweet potatoes
mashed potatoes
red rice
brussels sprouts with butter and garlic
cider jelly
spinach jalapeno casserole (again, thank-you, Justine)
---
chocolate chess pie
chess pie
eggnog pie
pear pie
pumpkin caramel pie
pecan pie
It was a Parsi/Cajun/Laurie Colwin/Southern/Joy of Cooking/Gourmet Today feast. Isabel and I prepared everything, save several key contributions from my sister Justine. It was a lot of fun and a lot of work and yesterday we were not so peppy.
I'm going to post two recipes here because they're spectacular and I've made them enough times that I feel some ownership, though I certainly did not invent them.
#1. Paul Prudhomme's cranberry relish
From his Louisiana Kitchen, which is a stellar cookbook. This relish is fresh and tangy and so much zippier than jellied "sauce" that I'm surprised it hasn't caught on in a huge way. You can watch a video of Chef Paul demonstrating a version of this recipe right here.
In a food processor, grind together 1 lb. cranberries, 1 1/2 cups sugar, 2 tablespoons vanilla, the juice and pulp from 2/3 of a seeded lemon, the sections from 2 peeled, seeded oranges. Refrigerate for a few hours before serving.
You'll have a boatload of relish; it's excellent on sandwiches. 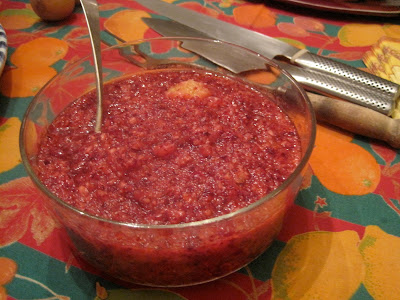 #2. John Egerton's chess pie
This recipe comes from his encyclopedic Southern Food, another stellar cookbook. I first made this pie in 1996 and have baked it just about every Thanksgiving since. Flat and very sweet and pale yellow, it my all-time favorite.
First, make pie dough using any recipe you like and roll it out to fit in a 9-inch pan. Preheat oven to 375. Beat 3 eggs with 1 1/2 cups sugar, 3 tablespoons melted butter, 1 tablespoon white cornmeal, 1/3 cup buttermilk, 1/2 teaspoon salt, and 1 1/2 teaspoons vanilla. Mix well. Pour into the crust and bake for 15 minutes. Reduce heat to 350 and bake 20 minutes more. It should be mostly set but still slightly jiggly in the middle. It will firm as it cools.
As usual, there is none of this pie left over.
As for the turkeys, they were storebought. They were not heritage. Next year, I vow to do better.
I was going to write about frying turkeys, except we're done with frying turkeys. We fried a bunch of turkeys in the mid-1990s when it first became trendy, then lost enthusiasm. Since my father-in-law really wanted to try one, we hauled out the cooker, the giant pot and seasoning injectors, bought six gallons of peanut oil, and went through the dramatic and laborious process one last time. The turkeys were tasty and spicy and much appreciated, but it's undeniably an ordeal and henceforth, we are roasting.
Posted by tipsybaker at 11/28/2009 07:02:00 AM