Some odds and ends 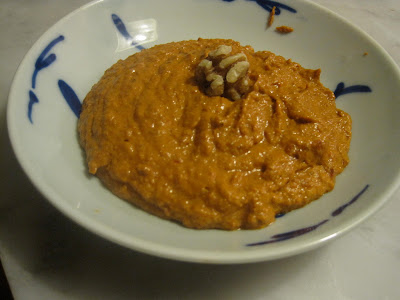 This is the best dish I've made from Gourmet Today, and it is the one for which I had the lowest expectations. Sun-dried tomato dip. Bleah, right?
I hosted this "group" -- it's not a book group, more like a chat group -- last night and wanted to make appetizers that wouldn't be fussy or difficult or involve oysters, phyllo dough, or caviar. I came up with two: chickpea crostini, which were fine, and sun-dried tomato dip, which was fantastic. It's smooth and rich, incredibly delicious and stupidly easy -- you just throw everything into a blender or Cuisineart. I served it with crackers, but the leftovers will go on sandwiches. I was going to copy the recipe into this space, but it is actually available right here. Try it!
I've been cooking steadily through Gourmet Today but for some reason have been disinclined to post. Everything is good but boring: celery tofu salad, tuna burgers, pasta with lentils and kale, etc. The pomegranate gelato, which was the recipe I most wanted make, failed. When churned, the cream turned grainy, a situation I've encountered before with fruit juice-based ice cream.
But the devil's food cake with marshmallow icing was a hit. 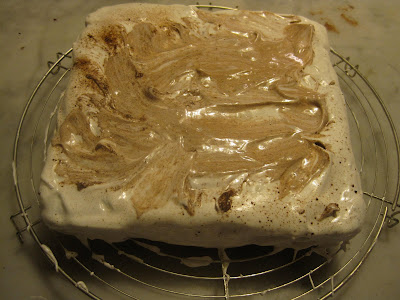 Isabel made it herself, start to finish. There was some disaster with the decorative cocoa powder falling too quickly out of the sifter at the very end, followed by a futile attempt to fix the situation followed by frustration and tears. I can relate; failed cakes are very frustrating, though I would not count this one as a failure.
This is our chicken run-in-progress. 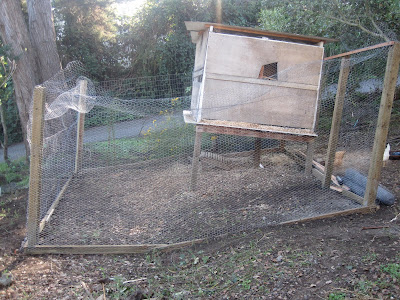 Call Sunset! I think they might want to run a Western design feature.
And this is my sister's son, whose name is Ben and who is, as far as I can tell, the perfect baby. 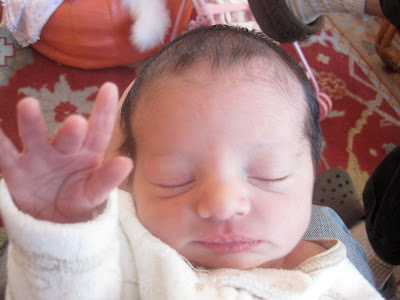