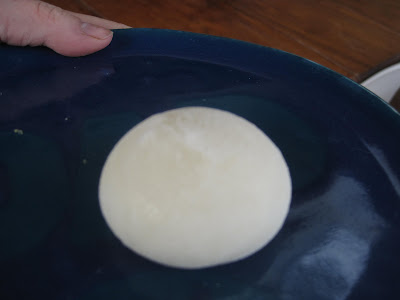 Wow, talk about a nothing picture. The mochi ice cream was so blindingly white that it confused the autofocus on my camera. But the photo does capture one of the salient features of Bubbies vanilla mochi ice cream, which is the pure-as-driven-snowy whiteness of it. You can buy this product at Whole Foods -- $7.49 for a box of eight, which is not cheap given that the mochis are very small, about the size of an egg.
What is Bubbies mochi ice cream? It is a ball of mediocre ice cream wrapped in a sheet of the pounded sweet rice paste called mochi, which often enrobes unctuous sugary bean pastes.  I have loved Japanese mochi confections since high school when I first discovered them. Why would anyone eat brownies when they could eat pink and pastel-green mochi? Because they are crazy.
Verdict: Eaten straight out of the freezer, a disappointment. The ice cream tastes artificial, like storebought vanilla ice cream before premium and super-premium. Also, it is hard. Gummy mochi skin wrapped around a firm ball of ice cream isn't a wonderful thing.
However, left out of the freezer for twenty minutes, the ice cream melts and what you are left with is a sturdy little sack of velvety, ice-cold custard. It's like a Beard Papa cream puff, but with chewy mochi instead of cardboard choux pastry. You bite a little hole in the mochi and suck out the cream. You probably don't want to do this in front of other people, but trust me, this is an extremely fun food to eat.
Would I buy this again? Yes, I definitely would, but probably won't because I ate a whole box of mochi ice cream in two days.
Posted by tipsybaker at 10/14/2009 10:02:00 AM