Not quite so many nooks and crannies 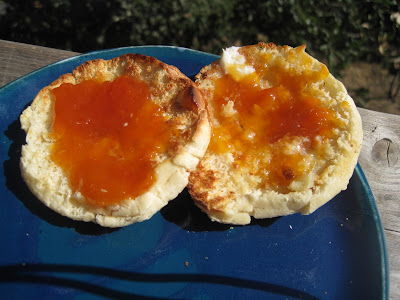 Make an eggy yeast dough and let it rise. Cut, as for biscuits.
Cook in a skillet, as for pancakes, except without butter and for about five times as long. 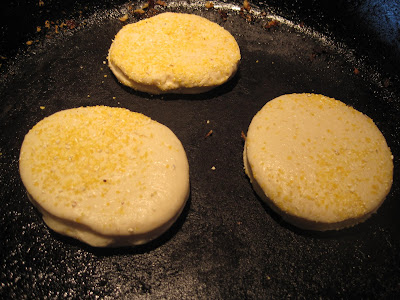 The discs of dough rise straight up, like the cylindrical towers on a storybook castle. Cool. Split with a fork, toast, butter, top with jam.
I have no brief with Thomas's, but homemade english muffins are tastier, less flimsy, less cottony, albeit also less craggy. Overall, better. But how much better? I don't buy english muffins very often so I probably won't make these very often, but it was fun, as always, to see the mystique of another supermarket staple evaporate, and so quickly.
We had old friends over for dinner the other night. It seems like yesterday that they were new friends, but suddenly they're old friends. I braised beef short ribs a la Mexicana from Rick Bayless's Mexico, One Plate at a Time, a dish that showcased the unholy alliance of poblano chiles, white onions, and tomatoes. I'm putting a black mark in the book beside this recipe for the faintly kidney-like flavor created by those ingredients. I only ate kidneys once, eleven years ago, in Ireland, and that sufficed for all eternity.
Here's Bayless on the dish: "Red white and green -- joyous colors on the national flag of Mexico. Red tomato, white onion and green chile -- awesome, amicable flavors on the plates of Mexico."
I don't agree with him, but he's such a cheery guy.
Here's another Bayless effusion: "Mexico is a hunble country that's been kept together, in great part, by rice pudding."
Wild overstatement, but sweet.
I served Bayless's rice pudding, an easy stovetop dish flavored with cinnamon and orange rind, and dotted with raisins. At the end of his recipe, where most cookbook writers would coldly command you to "serve immediately," Bayless writes: "A wonderful, warm treat awaits."
The pudding was warm, but too soupy to be quite wonderful. (The soupiness may have been my fault; although I followed his instructions to the letter, I believe I misinterpreted.) In any case, I can't bring myself to photograph food when there are people around. Even old friends.
It is coming on time for a new cookbook. I was truly devastated by yesterday's news from Conde Nast, and I think I have to do a Gourmet cookbook. But which one? The old leather maroon Gourmets with the gold lettering? Or the fat, shiny yellow one from a few years ago? Or the brand new one Ruth Reichl was pimping on Forum the other day? Or something else entirely? Suggestions?
Posted by tipsybaker at 10/04/2009 07:15:00 AM

Labels: english muffins, gourmet, make it or buy it, mexican, Rick Bayless
Email ThisBlogThis!Share to TwitterShare to FacebookShare to Pinterest